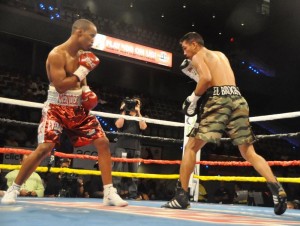 Mendez recently returned from an eight-week training camp with his trainer, Lee Beard, in England.

“I’ve been working hard to get ready for this fight,” Mendez said. “I’m excited to be fighting once again for the world title and on HBO Latino. I’m going to take care of unfinished business. I’m not going to leave the final result in the hands of the judges this time. I’m coming back with the belt for my family and team, Acquniity Sports, and my country, Dominican Republic.”

Eight months later, Mendez challenged Salgado in his native Mexico, dropping a closely contested and controversial 12-round decision (114-112, 114-112, 115-110), in which Mendez decked Salgado in the final round.

Mendez, now living in Miami, bounced right back, winning a 12-round unanimous decision (117-109, 116-110, 115-111) from Martin Honorio (32-7-1) last July in another IBF title eliminator. Honorio is the only common opponent for Mendez and Salgado; the Dominican having won a pair of 12-round decisions, the Mexican one.

“Our business started a little more than a year ago and Mendez will be our first world champion,” added an equally confident Henry Rivalta, Acquinity Sports’ Vice President of Boxing Operations. “In the first fight, Mendez should have done a little more early in the fight. He beat-up Salgado near the end of the fight, but the judges must not have felt that he did enough to beat the defending world champion in his home country. Mendez doesn’t plan for this fight to go the full distance. He’s in great shape after going through a rigorous training camp with his trainer, Lee Beard. Salgado won’t be fighting the same Mendez this Saturday night. Argenis is hungry and eager. He felt that he won the last fight and believes he’ll win this fight.

“Fighters don’t get many opportunities like this and Mendez is going into the fight to knockout Salgado. He dominated the fight against Honorio to win the IBF title eliminator and become Salgado’s mandatory challenger. We’re proud of Argenis for all the hard work he’s put in and behind him 100-percent. He has a great team with Lee and his manager, Jose Nunez. We’re ready to celebrate with a parade back home when Mendez becomes world champion.”

Mendez was also a world-class amateur boxer, compiling an eye-opening 238-13 record, highlighted by a gold-medal performance in the 2005 Pan-American Games. He captured a silver medal at the 2005 World Championships.

Salgado and Mendez are rated No. 2 and No. 7, respectively, by The Ring Magazine.

Go online to www.AquinitySports.com for additional information about Mendez or his stable-mates. Follow Acquinity Sports on Twitter @AcquinitySports, or friend us at Facebook.com/AcquinitySports.

Referee and Judges named for Mayweather-Maidana 2→