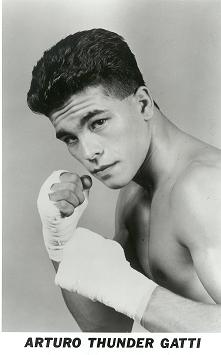 Authorities in Brazil labeled his July 11, 2009 death a suicide, but investigators now say he did not commit suicide.

For those who don’t believe Arturo Gatti committed suicide at a Brazilian resort more than two years ago, the three-time boxing champion’s death has remained a mystery. But private investigators hired by the champ’s manager told The Jersey Journal today their extensive probe has revealed it was no suicide.

“I think that when we get done with the press conference it will be pretty clear it was not a suicide,” said Chicago-based private investigator Paul Ciolino, who was hired by Gatti’s manager, Pat Lynch, to investigate the 37-year-old’s death.

Ciolino said the voluminous report based on interviews in the United States, Canada and Brazil, as well as expert opinions, will be revealed at an August 30 press conference at North Bergen’s Global Boxing Gym at 11 a.m.

Ciolino, who conducted the investigation with private investigator Joseph Moura, said an animation will also be released at the press conference showing Gatti could not have killed himself.

“It was not physically possible, given the circumstances and their (Brazilian police) theories,” Ciolino said.

The immensely popular Gatti, who was born in Montreal but called Jersey City home, was found dead in his room by his wife, Amanda Rodrigues, on July 11, 2009. She was initially charged with murder but on July 30 the charges were dropped and Rodrigues was released by Brazilian authorities. Gatti’s death was ruled a suicide by hanging.

Friends, family, and admirers gathered in Jersey City to remember Arturo Gatti at a memorial mass for the boxer. Gatti was found dead in Brazil earlier this month. His death was ruled a suicide by Brazilian police and his wife, once suspected of strangling the former boxing champion was released from jail. None of the people at the memorial could believe that Gatti committed suicide.

Authorities in Brazil said at the time that Gatti was drunk and despondent over his failing marriage. They said he used Rodrigues’ purse strap to hang himself, as his wife and son, Arturo Jr., slept upstairs.

Ciolino told The Jersey Journal today that the Brazilian investigation was “half-assed” and “The autopsy was totally incomplete. They did a lot of things that were not acceptable practice anywhere in the world. It was just totally inaccurate.”

Asked if the result of the investigation would point a finger at anyone, Ciolino said “We don’t have to. Only one person was in the apartment that night” — Gatti’s wife.

Gatti had a 40-9 career record and won titles in the junior lightweight and super lightweight divisions. Gatti was nicknamed “Thunder” and “The Human Highlight Reel,” and four times his bouts were named Fight of the Year. His most-talked about fights were three epic battles with Mickey Ward.

Ciolino said scientific expert witnesses from across the country are expected to make brief presentations at the press conference “which will conclusively lay to rest the
mystery surrounding Gatti’s cause of death.”