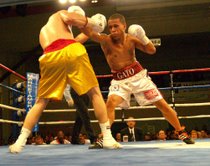 New York State Light Welterweight Champion Frankie “El Gato” Figueroa has arrived in New York City after an eight week stay in Big Bear Lake, California where he acted as the chief sparring partner to “Sugar” Shane Mosley. Figueroa’s time spent with the renowned welterweight accounted for his second time, aiding a fighter set to face Brownsville, Brooklyn’s “Super” Zab Judah. In May 2006, Figueroa assumed the five week duties of chief sparring partner to Puerto Rican welterweight superstar Miguel “Angel” Cotto, for a mega-bout that resulted in a knock out loss for Judah. Many who viewed the Cotto vs. Judah (June 9, 2007) bout recognized the influence Figueroa had on Cotto’s fighting style.

Mosley, however, will not be utilizing the tactics acquired from Figueroa on May 31, as scheduled, after Judah suffered severe lacerations to his arm last week, resulting in 50 stitches. “Everybody’s momentum was completely decelerated after the fight was called off,” said Figueroa. “It was a big disappointment.” However, Figueroa eagerly anticipates his treacherous southpaw style to cause serious damage to IBF Mexican lightweight champion Luis Rodriguez (22 wins-13 kos-1 loss) on May 14, as the Main Event bout on an ESPN 2 Wednesday Night Fights live telecast from the prestigous Gotham Hall in New York City, promoted by Dibella Entertainment.

“I don’t know much about Luis Rodriguez except for his stats,” Figueroa admits. “I just hope he comes forward, unlike my last opponent, Noel Rodriguez, who I had to repeatedly chase around the ring. But if I have to chase him too, so be it, I’ll do what it takes to win.” Figueroa, who also holds the light welterweight WBC Intercontinental Mundo Hispano and North American Boxing Federation (NABF) titles, is often referred to as “Boxing’s Best Kept Secret.” Over the past several years the Bronx bomber has developed quite the reputation for being to the best southpaw teacher in boxing. He’s played the role of chief sparring partner to Ricky “The Hitman” Hatton, “Vicious” Vivian Harris, Arturo “Thunder” Gatti and Jose Cotto