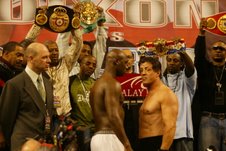 After five Rocky films followed by a 16 year hiatus, Sylvester Stallone wanted to place the final bookend on the anthology. After speaking with both Stallone and his co-star in Rocky Balboa, former light-heavyweight champion, Antonio Tarver, it is evident that they are both very proud of the film. Sly was obviously selling his new film, but I genuinely believed him when he said of the new Rocky film,