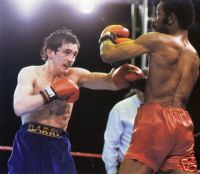 The Irish Emigrant and Danny Mac’s hosted an outstanding event for which Barry “The Clones Cyclone” McGuigan was the guest of honor on Tuesday night at Danny Mac’s in Yonkers NYC.

The Clones Cyclone took the WBA featherweight championship from Eusebio Pedroza in London on June the 8th 1985 by dropping him in the 7th and winning a unanimous 15 round decision. With an impressive record of 35 fights 32 wins, 26 by way of a knockout and only 3 losses Barry was a true Irish champion and an ambassador for peace during some of the more troubled times of Ireland. Never taking a side other than that of peace, everyone was united to see Ireland’s Barry Mcguigan be it Catholic or Protestant, and at ringside they stood arm to arm to see their champ, Ireland’s champ fight and somewhere in that time the term was coined “Leaving the fighting to Mcguigan”.

It was truly and honor to meet a great Irish champion, in these times when the gloves appear to be turning green again thanks to the Irish middleweight sensation Ireland’s John Duddy. The Clones Cyclone appears to be in tip top fighting form 20 some odd years after winning the featherweight championship. A grand champion, a man with an honest eye, a strong handshake and an even stronger singing voice as he knocked the pub down with a lively rendition of “Mustang Sally” along with some Van Morrison tunes. The Champ mingled and chatted with his fans and gave out pictures and autographs to the appreciative collection of his fans.