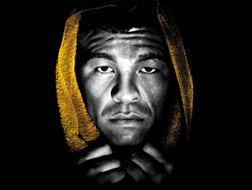 The Carlos Baldomir-Arturo Gatti fight for the (WBC, IBA, and linear) Welterweight Championship of the World was a great fight. I had predicted a very tough and hard fought decision victory for Arturo Gatti, but Carlos Baldomir showed that his victory over Zab Judah was not a fluke when he stopped Arturo at 2:50 of round number 9. Baldomir, who has fought as a welterweight or above for his entire 13 year career said he felt the strength difference after the first couple rounds and Gatti, who was fighting in his 4th weight class in his career concurred, stating that this was the strongest man he has fought as a professional.

What I expected was for Arturo to stick to the game plan that McGirt would lay out; to box early and put the early rounds in the bank. The consensus was that Baldomir would keep the pressure on, and that would slow Gatti down and turn it more and more into a war with each passing round. As most of the top boxing press had noted, Baldomir was underestimated entering this fight, and he ended up taking Arturo out of the game plan early.

After watching Paulie Malinaggi fight in a ring that seemed to be the size of a phone booth recently against Miguel Cotto to his disadvantage, it appeared Gatti had the advantage of a large ring to use his legs, but for the most part, he failed to take advantage of it. Arturo felt the strength, underestimated power and underestimated hand speed of Baldomir and reverted back to his instinctual “kill or be killed attitude”. On my card that cost him 4 of the first 5 rounds.

In an odd change of events, when the action was intense and the fighters traded at close quarters it seemed to favor Baldomir, but when the pace was slower and more technical accompanied by more movement from Arturo that worked to his advantage. Round 5 may be a round of the year candidate, as Baldomir hurt Arturo and Arturo reverted back to his instincts that have always served him against Wilson Rodriguez, Gabe Rueles and countless other times where despite being hurt he dug down and managed to hurt his opponent and steal rounds and pull out fights from the brink of defeat. At times he looked like his old self when he sat down on his powerful left hooks, and right hands, but Baldomir was able to take them and come back for more.

In the 6 Arturo appeared to jam his right wrist and didn’t throw it for a little, but he switched to southpaw briefly, as he had done several times in the fight and started throwing the right with authority again. The funny thing is, after he appeared to hurt the right, he seemed to be coming back and edging Baldomir out in closer, slower paced rounds. Gatti started to get on his toes and box a little more, but as he would later say, once he stared getting in his groove and started boxing he was already feeling the effects of fighting Baldomir’s fight for the first 5 or 6 rounds.

As the pace seemed to be settling down, it appeared the fight was starting to lean a little towards Arturo’s favor and as soon as Gatti appeared to be establishing a little bit of a rythym he got caught. Despite being tough as nails and having a good chin, Gatti has been hurt in a lot of fights. He did what he’s done on other occasions, backed up into the ropes, get his hands up and tried to fire back primarily with the brutal left hook that has put the lights out for many guys in the past. Gatti has ended up winning rounds he was hurt in before and even pulling out fights from the brink of defeat, but tonight it wasn’t to be.

Baldomir, who obviously came prepared for a war was in ridiculous shape and once he hurt Gatti in the 9th, he did not want to let the opportunity slip away. He let his hands go with a vengeance and dropped Arturo. Arturo got up and fired back, but when he needed it, Baldomir showed some nice hand speed and overwhelmed Arturo with non stop punches who was trying desperately but couldn’t get off. The blood and guts warrior got up on unsteady legs, but Baldomir poured on the pressure and dropped him again. Contrary to most boxing people’s belief, I usually prefer they at least give a fighter a chance to beat the count and see if he can survive the round (like they did with a badly hurt Fernando Vargas last week), especially for someone like Arturo Gatti, who had been in many situations in his career where his reputation prevented stoppages, but the referee quickly waived it off at 2:50 of round number 9.

Baldomir stated after the fight that he wants to fight any of the top names, particularly Floyd Mayweather Jr. Gatti mentioned a possible retirement, but I doubt that he will. Seems like I may be the only one, and there was no mention of it, so I doubt it would happen, but I wouldn’t mind seeing a rematch. Despite the strength, iron chin and underestimated speed and skills in general that Baldomir displayed tonight, I think if Gatti stuck to the game plan of boxing and moving earlier in the fight, the fight may have unfolded differently. If Arturo kept his right hand up and worked the body more, along with the moving it could have went 12 and would have been close.

I had the fight very close at the time of the stoppage in the 9th. Baldomir will match up nicely with Ricky Hatton, Antonio Magarito, and may have even earned a fight with a Mayweather or Mosely. As I said, should Gatti choose to return, and despite the fact that he would now be the underdog, I believe that he has the potential to beat Baldomir. A fight with Miguel Cotto is still a very attractive fight in New York or New Jersey as well. One guy who the HBO team mentioned for Arturo who he should not fight is Shane Mosley. Mosely-Mayweather is a very attractive and competitive fight in my book, but both of them have the freakish speed to give all of the other men around the 147 and 154 pound weight class fits.

Gatti and Baldomir both showed the heart, class and sportsmanship that make them true champions in boxing. Despite the fact that combined they have 17 losses, I’d spend my money to watch either of them fight in a heartbeat over many men with much more impressive records. They are true fighters and warriors and I look forward to seeing them back in action. However, it should be noted that Arturo Gatti has given as much to the sport of boxing as just about any other fighter over the last 15 years so should he decide to retire there is no shame in that option either.