This was a PBC production with Kings Promotions at the Sands Casino in Bethlehem, PA, with 7 bouts and a Fox Sports 1 telecast.

The opening round was more or less a feeling out round. In round two at the midway point Herring rocked Flores with a combination but was not able to follow up. In the third round Flores landed a 5-punch combination before Herring could land one in return. In the fourth round Herring scored with a leaf left to the chin of Flores. Herring had Flores following him around while Herring scored well to the chin of the taller Flores. In the fifth round Herring landed a left knocking Flores to the canvas. Later in the round another left from Herring knocked Flores off balance as his glove touched the canvas referee Gary Rosato had to rule another knockdown. Neither knockdown seemed to hurt Flores.

In the sixth round Herring hurt Flores with a 3-punch combination to the mid-section. Flores seems to be tiring. In the seventh round Herring became more aggressive as the fading Flores was taking some punishment. It brought the ring physician in to check Flores. In the eighth round the fans started to get into it as Herring was driving Flores all over the ring. Herring received a warning for a low blow as referee Rosato gave Flores a small break to recover. In the ninth round both boxers seemed to be going for the knockout as the revived Flores knew he needed one to pull out the fight and Herring wanted one for his record. In the tenth and final round Flores stormed out throwing punches knowing he is far behind while Herring is back peddling. By the end of the round it was Herring out landing Flores at the bell.

Herring walked around the ring holding a US Marine flag waiting for the decision that finally came with scores of Potara 99-89 as did DHB while Bruni and Morgan had it 100-90 all for Herring.

Welterweight southpaw Jamontay “Quiet Assassin” Clark, 9-0 (6), Cinn, OH, scored a technical knockout at 2:43 of the sixth and final round over Elvin Perez, 28-13-4 (19), of Nicaragua and Costa Rica in a scheduled six.

Clark opening the first round easily handling the shorter Perez with a steady array of punches mostly a good jab. In the second round Clark landed several lead left hands to the head. Perez came in low and landed an overhand left to the head of Clark which was his best punch far. Perez continues to be the aggressor but walking into Clark’s counter punching In the third round Perez had Clark against the ropes and landed a pair of left hooks to the head. Clark countered with a 5 punch combination. Perez landed a lead right to the midsection of Clark but paid the price as Clark landed several power punches with lead rights to the head.

In the fourth round Perez showed plenty of courage but was taking too much punishment. The ring physician checked on Perez for the second straight round. In the fifth round Clark became the aggressor for the first time as Perez is getting gun shy from taking too much punishment. In the sixth and final round (cut from a scheduled 8) Clark continues to be the aggressor trying hard for a knockout. He hurt Perez halfway through the round making Perez hold. A left to the side of Perez made him take several steps backwards and take a knee as referee Clark waved the fight off.

“This was a good fight for me beating an experienced fighter like Perez,” said Clark. Perez had won 3 of his last 4 fights.
Welterweight southpaw Alex “Chi-Heat” Martin, 12-0 (5), of Harvey, IL, seemed to pitch a shut out over Rossemberth “El Gallo Indio” Gomez, 17-5-1 (13), of Managua, NIC, over 8 rounds.

Martin controlled with his jab in an opening feel out round. At one time Gomez pointed to Martins feet and tried to land a right but Martin didn’t go for it. In the second round Gomez kept motioning to Martin to come forward and when he did Martin landed the punches not Gomez.

Martin’s hand speed and footwork easily won the round. In the third round it was all Martin staying once step ahead of Gomez and scoring well with combinations. In the fourth round both fighters received warnings for roughness as Martin continued to out land as Gomez to take the round.

In the fifth round Gomez continued to be the aggressor but being countered well by the slick Martin. In the sixth round Martin started using uppercuts and left hooks as Gomez kept coming forward. Martin landed a 4 punch combination as the frustrated Gomez walks in but is only hitting air.

Lightweight southpaw Raynell Williams, 11-0 (5), of Cleveland, OH, won a workmanlike 8 round decision over southpaw Gabriel “Gapo” Tolmaivan, 14-4-2 (3), of ARM and Glendale, CA, in the co-feature of the night.

In the first two rounds Tolmaivan came forward but was out boxed before landing a good right hook to the head of Williams. Williams has much better hand speed through two slow rounds of boxing. In the third round the highlight was in a good exchange in the last 5 seconds with Tolmaivan landing a left to the head of Williams after the bell. He received a warning from referee Rosato. In the fourth round both boxers mixed it well with Tolmaivan having his best round.

In the fifth round Tolmaivan landed a food combination to the head of Williams and followed up with a right hook to the head before Williams came back with a jab followed by a right hook to the mid-section. In the sixth round both fighters seemed to fight to a stand still. In the seventh round both mixed it up well with Williams getting the better of the action. In the eighth and final round both boxers exchanged straight left leads to the chin. Midway Tolmaivan hurt Williams with a left to the chin. He couldn’t follow up as Williams tied him up. Best round for Tolmaivan.
Scores of Bruni 78-74 as did DHB, Morgan and Somma 79-73 all for Williams. Referee was Rosato.

In the opening round Johnson flipped Gonzales to the canvas bringing a warning from referee Rosato. Gonzales went on the attack driving Johnson into the ropes. With 5 seconds before the bell Gonzales landed a hard left hook to the head of Johnson. In the second round Gonzales missed with a wild right and got countered with a Johnson uppercut to the chin. This was a pretty much even round with too much holding from Johnson.

In the third round Gonzales walked right into a right uppercut to the chin stopping him in his tracks. Both fighters landed left hooks to the head at the same time. It’s been a close fight through 3 rounds. In the fourth round Gonzales came storming out with both fighters throwing punches when Gonzales landed a hard right to the chin dropping Johnson who let the referee know he had enough before being counted out. This was the first fight for Gonzales under the Kings Promotion banner. “My trainer Kevin Carmody told me I’m going to sleep out there and to go out and take him out,” said Gonzales.

In the opening round White had Rubalcava on the canvas twice when referee Clark waved it off. How a 2-15 guy got approved is a wonder. It was his sixth straight loss and has been 1-14 in his last 15 fights though only stopped for the third time.

Lightweight Carlos “Rock Hands” Rosario, 4-1 (2) won a split decision over Victor Vasquez, 4-2 (2), of Yonkers, NY. The fans were not happy with the decision rightfully so.

It was a brawl from the opening round as Rosario seemed to take the first with the taller Vasquez the last 3 rounds on the DHB score card. The fans loved it and so did press row.

Scores were Bruni 39-37 for Vasquez while Somma and Portia had it 39-37 for Rosario for a split disputed decision and the fans let the judges know it. Eric Dali was the referee.

In attendance and working for Fox were former two-time cruiserweight champion Steve “USS” Cunningham and former heavyweight contender Travis “My Time” Kauffman recently seen in a fight with Chris Arreola. New welterweight champion Danny “Swift” Garcia made a surprise appearance with the two of them in the ring. Garcia recently won his second division title. Both Cunningham and Garcia are out of Philadelphia and joined the telecast while Kauffman is from Reading and also helped with telecast.

Kings Promotion will be back March 5th with a dynamite show with what amounts to 3 main events in one. Philly’s unbeaten Julian “J-Rock” Williams will be in one of the featured bouts. 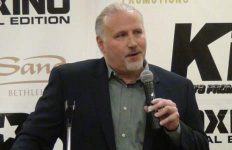