On March 13th legendary WBC, WBA and IBF World Middleweight champion Marvelous Marvin Hagler passed away in New Hampshire at the age of 66. His record was 63-3-2 with 52 knockouts fighting out of Brockton, Mass., while being born in Newark, NJ. He was inducted into the IBHOF in 1993. He had a dozen successful title defenses before losing his title to “Sugar” Ray Leonard in 1987. He eventually moved to Italy and appeared in Italian movies. He married his wife who was from Italy and eventually moved back to the US.

Hearns story is that Hagler was in the hospital. What was in print was: A real true warrior Pray for the king and his family…he’s in ICU fighting the after effects of the vaccine! He’ll be just fine but we can use the positive energy and prayer for his full recovery!

A few hours after this was posted Hagler’s wife Kay announced her husband’s demise on Facebook, without mentioning the cause of death. “I’m sorry to make a very sad announcement. Today unfortunately my beloved husband Marvelous Marvin passed away unexpectedly at his home here in New Hampshire. Our family requests that you respect our privacy during this difficult time,” she wrote.

A post on Hagler’s website stated: We are very sad to report that Marvelous Marvin Hagler died on March 13 of natural causes near his home in New Hampshire. He was a champion until the end. His family asks for privacy at this time of sorrow.

It’s been rumored Hagler’s wife Kay had him buried without an autopsy and has moved from their New Hampshire home. 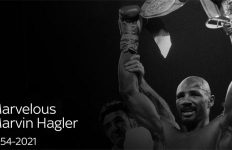