2016 Heavyweight Olympic Gold Medalist Tony Yoka, of France continued unbeaten stopping Joel “Big Joe” Tambwe Djeko, of Belgium and UK, in the final seconds of the twelfth and final round for the vacant EBU European Union Heavyweight title at the Loire-Atlantique, Nantes, H Arena, in France Friday over ESPN+ promoted by All Star Boxing and Top Rank.

In the first three rounds it was all Yoka pressing using his jab following with rights to the head with little return from Djeko until the final 10 seconds of the third. In the sixth and seventh Djeko got offensive in the first and last 10 seconds but was backing up in between. In the seventh Yoka rocked Djeko into a corner halfway through the round.

In the eighth round there was a noticeable sign of swelling under the right eye of Djeko from Yoka’s jab. Yoka had Djeko pinned in the corner at the bell. In the ninth and tenth rounds Yoka continued to win every round with Djeko starting and finishing the rounds with some offense otherwise on the receiving end of Yoka’s offense.

By the end of the eleventh round the right eye of Djeko’s was near closing. It was a big round for Yoka. In the twelfth and final round Yoka was looking to close the show. In the final minute he opened up on Djeko having him pinned in a corner landing close to a dozen unanswered punches including a solid uppercut on the chin. The final punch of the fight was a half jab hook to the right eye of Djeko that spun him around in the corner quitting in forcing referee Jean-Robert Laine to call a halt. It was the first time Djeko had been stopped.

Yoka was very methodical in his performance while Djeko who spent most of his career at cruiserweight seemed content in going the distance. Yoka had spent time in the camp of Virgil Hunter in CA who is most known for training champion Andre Ward. Yoka’s style was similar in doing enough to win but not with entertaining the fans. Djeko had spent time in the past at the Don Turner camp in North Carolina at one time in his career.

In the first three rounds Mossley countered well against the oncoming Kaiser. In the fourth round Kaiser held her own pressing Mossley. In the fifth round Kaiser switched to southpaw and back to orthodox. With fifteen seconds to go in the round Kaiser stung Mossley with a right on the chin.

In the first round Saad had his way. In the second and third rounds Ivanov made it more competitive possibly taking the third. He has been the aggressor against the taller Saad.

In the fourth through the sixth rounds Saad continued controlling with his jab having a much longer reach. In the final 30 seconds of both rounds he snapped back the head of Invanov who keeps coming forward. In the seventh round at the halfway point Saad opened up on Ivanov. In the final minute Invanov came back having Saad against the ropes until the final 20 seconds when Saad opened up on him. In the eighth and final round late sub Ivanov was still working the body when he was able to get past the reach of Saad but not enough to take the round.

All 3 judges gave it to Saad but no scores were mentioned. This writer had it 79-73 Saad. Invanov took the fight on 10 day notice.

In the first two rounds Osabe had an edge with both showing plenty of action. In the third Osabe started showboating and it cost him. In the fourth and final round both fighters had their moments with Osabe having the edge. 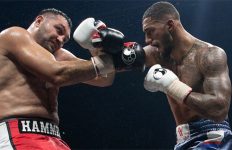 What Has Happened to the 2016 Olympic Gold Medalists?→ 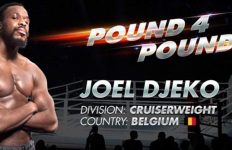