In the first two rounds the southpaw Zepeda forced the action as the taller Ramirez countered splitting the rounds. In the fourth round Zepeda had Ramirez hurt in the last half minute with a combination to the chin. At the end of the fifth round Zepeda knocked out the mouthpiece of Ramirez and continued landing unanswered punches when the corner threw in the towel forcing referee Ray Corona to call a halt.

In the first round a right to the body followed by a right on the chin from Foster dropped Roman half a minute into the round for an 9-count by referee Jack Reiss, but survived to the end of the round. In the second round Roman came back the aggressor going to the body with Foster countering well, being the faster of the two. In the third round Foster continued getting the better of the two with his hand speed but Roman never stopped trying. In the fifth round Roman worked the body inside with Foster staying with him inside.

In the seventh and eighth rounds Roman did enough body work to take the rounds. In the ninth round Foster dropped Roman with a left hook on the chin for an 8-count. Upon rising Foster was all over him until referee Reiss wisely called a halt.

In the first round Hernandez used uppercuts to the chin of Garza who had a small cut under his left eye by the end of the round. In the second round Garza was cut under the right eye by Hernandez. In the third round a left hook to mid-section from Hernandez dropped Garza who took the count on a knee from referee Ivan Guillermo. 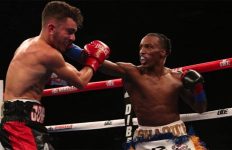 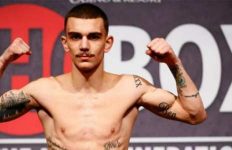 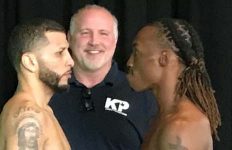 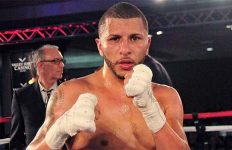 The Return of Frank De Alba Friday at Sands in Bethlehem, PA→