In the first two rounds the oncoming Ritson had an edge. In the third it was a big round for Vazquez who showed more than his counter jab. Ritson came back well in the fourth but in the fifth and sixth it was close going either way.

In the seventh and eighth rounds Vazquez outworked Ritson. In the ninth and tenth rounds Ritson had his moments but not enough of them. He couldn’t cut the ring off and Vazquez was firing with both hands.

In the eleventh round near the end of the first minute a Vazquez jab knocked out the mouthpiece of Riston. Halfway thru the round a right from Vazquez on the chin knocked the head of Ritson sideways. In the twelfth and final round Vazquez was landing 3-punch combinations to the chin of Ritson whose body work was not effective in this one not being able to catch Vazquez. Riston had welts over and under the right eye at the end. Referee Mike Alexander had an easy night.

“It was a very close fight. He would frustrate with that jab. We got the win,” said Ritson.

Ward was cut in the seventh round over the left eye by an accidental clash of heads. The contest was called off by the ring physician after the eighth round.

In the fourth round a combination from Leach on the chin of Ashfaq and down he went for an 8-count. In the seventh round’s final 10 seconds Leach countered Ashfaq who had been winning the round with a left on the chin and down he went for the 8-count past the bell. In the ninth round Ashfaq suffered a small cut on the outside of his right eye and lost the round. In the tenth and final round Leach seemed to have an edge in a good finish for both fighters. Leach had swelling under both eyes at the end. 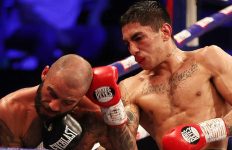 Lewis “Sandman” Ritson Stopped by Jeremias Ponce in 10 in the UK Saturday!→ 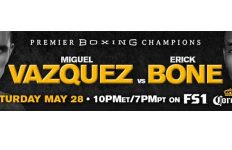 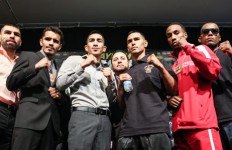 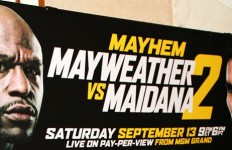