In the eighth round Hughes landed several lead left’s to the chin of Kotochigove taking the round. In the ninth round it was close with Hughes possibly tiring but still may have gotten the round. In the tenth and final round Kotochigove was looking for a stoppage being behind on the scorecards and did enough to take the round.

In the first round it was competitive until the final seconds when a left from Bachkov on the chin of Gonzalez rocked him. In the next six rounds the former outstanding amateur Bachkov did well against a tough more experienced opponent especially in the sixth and seventh rounds.

In the eighth and final round Bachkov had Gonzalez hurt halfway through the round. Bachkov did well going 8 rounds in his first fight.

In the second round Abdelghany continued his bull rushes having the taller Hyland into the ropes saving him from a knockdown. In the Hyland used his jab well but did too much holding. In the fourth Abdelghany rocked Hyland with a right on the chin in the final minute. In the fifth round Abdelghany rocked Hyland with a pair of rights on the chin on several occasions. In the sixth and final round instead of using his jab seemed all Hyland did was grab.

In the first four rounds the taller southpaw Anwar controlled with his jab following with left’s to the chin of Mendoza. In the fifth round Anwar pushed Mendoza down and the referee counted as a knockdown. In the sixth and final round Anwar continued the shutout going the distance for the first time. 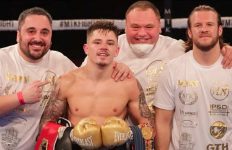 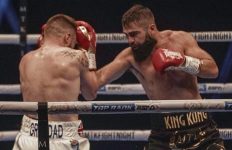 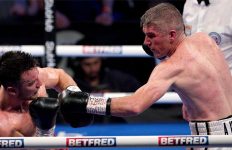