In the fourth round Buatsi came back out working Calic. In the fifth of a competitive round Buatsi hurt Calic in the final seconds of the round having him in trouble up until the bell with a right on the chin. Buatsi took the last three rounds with a good body attack.

In the seventh round Calic turned southpaw and halfway through the round got hurt with a lead right and several more punches from Buatsi and Calic took a knee. Seconds later the corner of Calic surprisingly threw the towel in forcing Referee Michael Alexander to call a halt. Buatsi finished with a lump under his left eye while Calic may have had a broken jaw.

“He was tough and when he turned southpaw I was able to get my right in. I have been off for more than 400 days. I give him credit for he was a tough opponent. He was a tough amateur and a tough opponent and he was coming to win but we did what we had to do,” said Buatsi.

In the first five rounds it was all Cameron hitting Araujo at will. Araujo continued to walk forward into punches with little in return. In the sixth round Cameron pushed Araujo to the canvas and continued beating her to the punch. Due to accidental clash of heads Cameron was cut on right eyebrow.

In the seventh round Cameron hurt Araujo several times in the final minute with punch after punch to the head. Through nine rounds Cameron moved around the ring coming in a beating on Araujo as if she was a heavy bag and then moving again. In the tenth and final round Cameron made it a shutout!

Scores were 100-90 by all including this writer.

Middleweight Linus Udofia, 16-0 (8), of Nigeria and Luton Bedfordshire, UK, stopped John Harding, Jr., 8-2-1 (2), of Brixton, London, UK, in a defense of his BBBofC English title at 2:07 of the ninth round winning all 8 previous rounds of a scheduled 10 rounds.

In the first two rounds Harding threw one right and took the second round off. In the first five rounds Udofia won all while Harding was never penalized by referee Michael Alexander for continuous holding.

In the sixth round Udofia hurt Harding with a body shot in the final seconds. In the next three rounds Udofia had to spin Harding off of him due to referee Alexander not doing his job. In the ninth round Udofia landed a right cross on the chin of Harding and down he went. Referee Alexander finally did something right in waving the fight over.

In the first four rounds Fiaz countered well with his left hook while Baker pressed landing little. In the fifth and sixth rounds Fiaz did little on offense as Baker took both rounds. Seventh round close but went to Baker. In the eighth and final round Baker continued to outwork Fiaz over the last four rounds.

In the second round Babic landed a left hook on the chin and down went Kennedy at the halfway mark of the round. In the third round Babic put Kennedy away after half a minute with Referee Ian Lewis waving it off.

In the first two rounds 6:05 Hedges used his reach to win the round. In the third and fourth rounds Ardon chased Hedges. 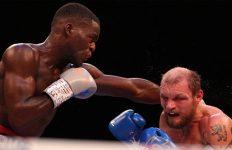 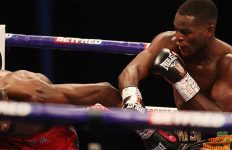