Boxing promoter Bob Arum has told ESPN Top Rank will stage four new four fight professional boxing cards, and is aiming for June 2020 to restart televised pro boxing. The cards will have no spectators. Arum is currently working with the boxing commissions in Nevada, California in Texas to try make arrangements. Fighters will come from the United States, if international fighters are not available. All ringside officials, fighters, ringside personnel and corner people will be tested negative for COVID-19 Novel Coronavirus before each event before the event will be staged, in accordance with stage and national regulations and protocols in the United States. Two or three of the bouts would be televised on ESPN or ESPN+, with one untelevised extra bout. The fighters will be training at the Top Rank Gym in Las Vegas, Nevada, which would be sterilized in advance.

According to Arum, “We (Top Rank) hope to be operational sometime in June (2020). We’re working on commissions in California and Nevada and Texas. We want to make sure that when we’re up and running, and of course, it would be without audiences, (if) it’s done properly (the new style boxing shows during the Novel Coronavirus Pandemic) when the participants, not only the cornerman, have been tested (for Coronavirus). The key thing is testing. The commission (officials), the referees, the judges, you (sports journalists), the (ring) announcers, the camera people. Then, hopefully, we can (eventually) do two or three boxing events a week.” Judges, announcers and other personnel would not be near the ring.

The fighters contracted to participate in these test cards will have to be placed in quarantine isolation before the scheduled card take place, as well as all other ringside officials and personnel. Insisting on isolation protocols and procedures are the only way now to fully insure the safety of the fighters and individuals involved, given the strange circumstances professional sports currently find themselves in. This past weekend, an eight bouts boxing card with facemasks was staged in Managua, Nicaragua, without spectators. Life goes on. Nicaragua’s attempt to overcome the adversity of the moment might be the catalyst which inspires Mr. Arum to move forward with a better plan to restart boxing.

Arum continued “We are going to work with a major property in Las Vegas if the fights are going to be in Nevada. We’ll put the fighters in quarantine. Then (later) the fighters will be taken to the Top Rank Gym, where they’ll train with sparring partners. Right now, we’re sterilizing, and getting our gym (into) appropriate condition. We can do this.” In a Las Vegas hotel, a temp ring with cameras and lights would be constructed in a ballroom. 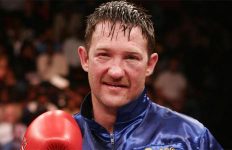