There have been fantasy tournaments, and dream matchups, but some matchup concepts have proven more popular than others. Muhammad Ali, Mike Tyson, Joe Louis, Jack Dempsey, Larry Holmes and Jack Johnson are some of the stronger and more popular all-time heavyweight names in these mythical tournaments.

The late former world chess champion Bobby Fischer did not consider himself the greatest chess player of all-time, only the best in his time. Such could be said of many world heavyweight champions. However, Rocky Marciano and Charles ‘Sonny’ Liston get special consideration for one unique characteristic they both shared: Marciano stood 5’10” and weight 179 to 192 pounds. Liston stood 6’1″ and weighted 198 to 212 pounds. Both fighters were relatively small world heavyweight champions, when compared with today’s gargantuan heavyweights. However, they both packed indelible timeless punching power.

A Marciano versus Liston fight, in reality, is best compared to Rocky versus Ezzard Charles I, which went 15 rounds. With both Marciano and Liston in their prime, Liston would survive, but could not win because he could never Rocky’s punch count and work rate coming forward. Given Rocky’s solid chin, Liston would be unable to take Rocky out.

While Liston stood slightly taller and weighed slightly more than Rocky in their primes, Marciano’s come forward and get inside work ethic by necessity means Rocky would outwork Liston by decision over 15 rounds. Liston went the distance twelve times during his career, including going the twelve rounds distance with Eddie Machen, and going ten rounds with Billy Joiner and Marty Marshall. Liston was also involved in three split decisions, winning two of them, and losing one of them.

Liston could fight, but to go the 15 rounds distance with Marciano meant taking more shots than you were giving. Liston got stopped three times in regional and world title bouts, twice by Muhammad Ali, and once by Leotis Martin (whose retinas Liston detached and ended Martin’s career). Marciano also had the key advantage of amazing power in both hands. Having hands stronger than Liston meant Marciano could wear Liston down, and eventually break him down. Rocky had better quality opponents than Liston did in his career to that point. After watching Liston knock out Floyd Patterson early twice, a fight with Liston was far more appealing to Rocky than Floyd or Ingemar Johansson.

According to the late boxing trainer Lou Duva, Marciano traveled in 1964 to Miami Beach, Florida, to do paid radio spots for the Sonny Liston-Muhammad Ali rematch fight.

“Rocky went to the gym where Liston trained. Rocky was supposed to interview Liston, but Liston kept teasing Rocky, saying Rocky wouldn’t last two rounds with him. Rocky stayed calm, but gradually he was got mad. Finally, an annoyed Rocky said to get him some boxing trunks, boxing shoes, and boxing gloves. Rocky was serious. Rocky wanted to get it on with Liston in the ring gym immediately, no questions asked. Liston’s challenge was immediately accepted, right then and there. Liston and his entourage suddenly ran out of the gym like they were doing the hundred yards dash.”

Nine years after retirement, did Rocky have enough left at age forty to leave ‘Sonny’ with a memory? Rocky believed so. Unfortunately, when it came to Sonny Liston and his entourage, nobody stuck around the gym to give him the unique chance to find out. 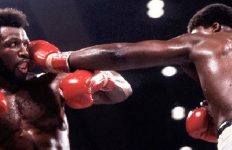 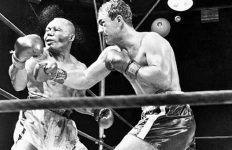 Were Marciano and Walcott’s Two Title Fights an Upset and Set-up?→