The decade of the 1970’s was a great one for boxing and the Southern California scene was especially a hotbed. Throw a dart and you’d come up with a fan-friendly sizzler at the Inglewood Forum, the Olympic Auditorium, the Convention Center in Anaheim or even the Valley Music Theater in Woodland Hills. Throw that same dart at the following fighters and you would land on fighters who made the West Coast scene a special one.

Men like Danny “Little Red” Lopez, the star-crossed Bobby “Schoolboy” Chacon, Jose Napoles, the legendary Ruben Olivares, the underrated Ernie “Indian Red” Lopez, Armando Muniz, Rafael Herrera (who beat the great Olivares twice), Carlos Palomino (who made one of the greatest comebacks in boxing history), Carlos Zarate, Art Hafey, Shig Fukuyama (who had that one big moment against “Little Red” in 1974), Octavio Gomez, Rudy Robles, Frankie Baltazar (who practically lived in the Olympic where he had 31 of his 43 career bouts), and Alberto Sandoval who had 37 of his 38 career fights in the Olympic Auditorium!

Many of the above were world champions; six are in the International Boxing Hall of Fame.

The following fights are representative of this super exciting and very violent time:

This one was at the Forum in Ingleside, California and the Associated Press report said it best:

“Former world bantamweight champion Ruben Olivares of Mexico ruined the perfect record of local featherweight hero Bobby Chacon, scoring a 9th round knockout. Chacon, 126, appeared strong in the first two rounds, but Olivares dramatically changed the complexion of the fight in the 3rd and didn’t lose another round. Olivares, 125 3/4, knocked Chacon down with a straight right in the first ten seconds of the 9th and then pounded the San Fernando fighter unmercifully for the remainder of the round. During the intermission, Chacon’s manager, Joe Ponce, asked referee Dick Young to stop the fight, which had been scheduled for 12 rounds and for the NABF featherweight title.”

The pin-point exchanges in the ninth were non-stop and raised the bar for ring malice; it was legal assault and battery.

In June, 1975, Olivares met Chacón who was then the WBC’s world featherweight champion. Olivares won the fight by savage stoppage in round two and became a world champion for the fourth time.

The trilogy ended in August 1977 when Chacon won a UD at the Forum.

However, the equally adored Olivares dominated the bantamweights and retired with a record of 89-13-3 with an astonishing 79 wins coming by knockout.

Danny “Little Red” Lopez was 23-0 when he faced off with Bobby Chacon (then 23-1) at the Sports Arena in Los Angeles in front of 16,000 screaming fans. Both fighters personified excitement; in fact, Little Red was a “Gatti before Gatti” as he often would come back in dramatic fashion to snatch victory from certain defeat.

As for drama both inside and outside the ring, no one ever topped Chacon. His career against the toughest opposition imaginable included historic fights against Cornelius Boza- Edwards and four thrillers against Bazooka Limon against whom he was 2-1-1. His name was synonymous with “Fight of the Year” but so was Danny’s. He was all heart and all action; you had to staple him down to the canvas if you wanted to keep him down. His only loss prior to the Lopez fight was against the aforementioned Ruben Olivares (71-3-1 at the time).

LA Times sportswriter Steve Springer recalled that fight in a story that ran in the Times on April 28, 1995:

“In the early rounds of that memorable night in 1974, both fighters absorbed and delivered a terrifying amount of punishment. If not for the breaks between rounds, there would have been no time to breathe. But by the end of the fourth round, having seen and survived the best Lopez had to offer, Chacon took command…Chacon maneuvered Lopez into the ropes. Lopez dropped his hands and Chacon moved in for the kill. But referee John Thomas stepped in and ended it.”

It was not quite malevolence but it was something pretty close. The fans got what they paid for and more. Sadly, Bobby would pay a terrible price, but he kept his sense of humor almost until the end. When questioned about his failing memory, he would smile that smile that would stop you in your tracks and say, “I forgot I forgot.”

Bobby Chacon, like Ruben Olivares, was adored by his fans in a special kind of way.

Now it was Danny Lopez’s turn to prevail against the young but talented and undefeated Sean O’Grady who had run up 29 straight wins until he met “Little Red” at the Inglewood Forum. In 1975 alone, the upstart, who turned pro at age 15, fought 26 times with 22 stoppages (but mostly against weak Oklahoma-style opposition which ill-prepared him for the likes of “Little Red” who was honed on Southern California-type opposition).

O’Grady instinctively chose to brawl with the gritty and hard-hitting Lopez rather than use fundamentals and technique and while it was a good fight for as long as it lasted, the youngster absorbed serious punishment prompting his “corner” which was composed of father, manager, mentor and trainer Pat O’Grady to toss in the towel after four rounds, saving Sean for another day.

It would prove to be an extremely wise decision as the youngster would later have great success. O’Grady won the WBA lightweight title in 1981 and finished his career at 81-5 with 70 wins coming by way of stoppage, an eye-popping KO percentage of 81.4 %.

While the 70s were considered the golden age for heavyweights, serious fans and historians know that the smaller men should receive the same level of respect. They also know that Mexico’s bantamweights of the 50s were nothing less than sensational, building the platform for the chain of sizzlers that delighted Southern California fight fans in the 70s.

Ted Sares can be reached at tedsares@roadrunner.com 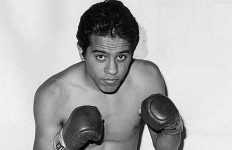 Flags At Half-Staff For Bobby Chacon→