In the first round Plant pawed with his left jab, setting up his opponent for the most part but landed good rights to the body while Feigenbutz did little on offense. In the second round Plant hurt Feigenbuts with a right to the chin followed by a left hook. Plant followed up with a 3-punch combination.

In the third round Plant used left uppercuts the chin drawing blood out of the nose of Feigenbutz. In the fifth round Plant continued going to the body. Feigenbutz seemed to leap in with his left hook that so far has fallen short but still dangerous.

In the eighth round Plant continued dominating the frustrated Feigenbutz who can’t seem to get his punches in. In the ninth round Plant came out firing a flurry of punches to the body and head of Feigenbutz. The nose of the challenger is bleeding again.

Between rounds the face of Feigenbutz is swelling besides the damaged nose questioning if the fight shouldn’t be stopped. In the tenth round Plant decided to stand toe to toe with Feigenbutz. Plant dominated the fight landing numerous punches without return before the Referee Malik Waheed wisely called a halt.

“I want to dedicate my fight to my daughter Alia (passed at 19 months old) who is in heaven along with my grandfather (by his side in the ring) and to the fans here in Nashville. I want to fight WBC Champ David Benavidez who I having been asking for so let’s go,” said Plant.

In the co-feature southpaw Bryant “Goodfella” Perrella, 17-3 (14), #146 ľ, of Ft. Myers, FL, got short changed by referee Jack Reiss coming off two knockdowns losing to Abel Ramos, 26-3-2 (20), #145, ľ, of Casa Grande, AZ, at 2:59 of the tenth and final round. Perrella for some reason was told to “walk to your left” it seemed instead of “walk to me” and because he didn’t walk right stumbling a bit but after being knocked down twice who would walk normal?

At ten seconds to go in a round a buzzer or whistle goes off that the referee is well aware of preparing to step between the fighters at the bell so there is no late hitting. With one second left in the fight Reese prematurely waved the fight off. Perrella was ahead after nine rounds by scores of 87-84 and 88-83 twice. His corner was upset and should have been. This is the same referee that allowed Tyson Fury to get up from a second knockdown by Deontay “The Bronze Bomber” Wilder and get a draw though it looked like he won in this writer’s opinion. 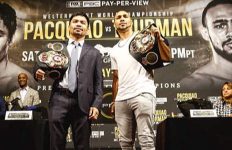