In the first round Ramirez landed a left hook inside of 15 seconds to the chin of Hooker driving him into the ropes. Half a minute later a jab on the chin from Ramirez and stepping on his foot and down went Hooker again. Hooker got up landing a right on the chin of Ramirez.

Hooker came back with rights to the chin of Ramirez. In the fourth round both used hard jabs while Ramirez used his left hooks and Hooker his right hands. In the fifth round it turned into a war! In the sixth round Ramirez swarmed all over Hooker having him out on his feet forcing referee Mark Nelson wisely had to call a halt. It started with a right on the chin.

“I unified the titles tonight at 140 and I am very happy and very blessed,” said Ramirez.

Through the first half of the fight southpaw’s Farmer countered and Frenois chased but couldn’t cut off the ring. Farmer gave him a classic boxing lesson with his speed of hands. In the tenth round Farmer lost a point for a low blow. The only other round Frenois won was the final round.

“I came in here and did what I had to do. I hurt my right hand every fight. Gervonta Davis says he wants the fight but the people behind him say something else.

In the first two rounds of the rematch from their draw in 2017 they were close with 5 day sub Hernandez holding a slight edge. In the third round it was mostly Dawejko, using his left hook to the chin of Rodney Hernandez. In the fourth round Hernandez finally started punching but not out punching Dawejko’s left hooks.

In the fifth round Hernandez was more active throwing combinations to Dawejko’s single left hooks. In the sixth round Hernandez had Dawejko against the ropes landing a flurry of punches until Dawejko grabbed him. He came back with double left hooks but not enough to take the round. Referee Cole has had an easy time so far.

In the tenth and final round it was all Dawejko with his best round landing double left hooks to the head and body. Hernandez seemed to have run out of gas considering taking the rematch on 5 days notice.

“I felt I did enough to win. He is a tough opponent. Forget about his record. I want to thank my manager Mark Cipparone of Rocco’s Collision, Jason Fortune and Lenny my cut man,” said Dawejko.

Williams landed a 3-punch combination with a final right on the ribs dropping Harris for the count.

“I knew when I landed the left hook to the body, followed by a final right, and I am new and have more ammo,” said Williams. 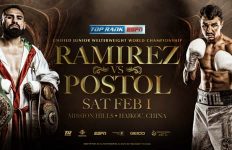