Pennsylvania got kicked out. Virginia came in but left. Alabama came in and allowed “anything goes!” Now they are leaving. Why? Why doesn’t Delaware have their own commission?

The mismatches in Dover at the Casino caused them to say “enough is enough!” They were holding more fights than anyone. Got so bad they were giving tickets away.

In February of 2017 Multi-champ Roy Jones, Jr. came in and they packed the Chase Center in Wilmington. Then a new promoter for the area Dee Lee Promotions came in with the same matchmaker that worked Dover.

Diane Lee Fischer’s Dee Lee Promotions came in with over 30 events promoted in the past. A Vineland, NJ, resident she left NJ in 2012 and promoted in New England. Her next 5 shows were all at the Hockessin PAL, in Hockessin, DE.

Fischer’s first promotion in DE was 5/12/2018 with Nick Tiberi of DE as her matchmaker. There were 26 rounds scheduled for 6 bouts. Five were knockouts with a total of 13 rounds fought.

Two fights go the distance of 4 rounds. Local 30 year old Brandon Mullins, 1-0 (0) takes on Therran Smalls, 0-4, stopped all 4 times never getting past 3 rounds, from Charleston, SC. Just 0:31 into the first round Smalls was stopped. No brainer?

Then comes the debut of a local ticket seller age 44 named Stefan “The Freak” Talabisco weighing 267. His “opponent” comes in at 285 named Brian Richardson 0-2 stopped at 0:50 and 1:40 of the first round. He hadn’t fought in an 18 month period then weighing 239 a 46 pound weight gain since his last match. In a 1:06 of the second round he falls down and fight is stopped. Fans go wild for the ex-Marine “The Freak”.

On September 15, of 2018 same promoter has her second show in DE. There were 8 fights with 6 stoppages. First bout and main event go the distance for a total of 12 rounds.

19 year-old Vinnie Kirkley makes his debut. Brought in from Rocky Mount, NC, is 36 year-old Tavares Owens, 0-5 stopped in his last 4 bouts never last 3 rounds. 1:07 into the first round Owens was out. He was suspended due to protect himself after instructed by the referee.

Local female Schemelle Baldwin, 1-0, stopped Lashwanda Ellis, 0-1, from Wilson, NC, 1:01 of the first round. Ellis hadn’t fought in 17 months when she was stopped in 0:38 of her debut. She was suspended after this bout for complete and total lack of skills and effort. Other words “she fell down and didn’t want to continue?”

Nigel Fennell made his debut stopping Antonio Allen, 0-8-1, stopped 3 times, in the second round. The matchmaker’s nephew Joey Tiberi, Jr, 15-3, stopped Mexico’s Francisco Medel, 12-14, stopped 12 times who couldn’t come out for the fourth round.

Four of the nine bouts were mismatches at best.

On December 1, 2018, this promoter had 9 fights with 4 stoppages. Schemele Baldwin was back stopping 35 year-old Crystal Byers, 0-4, stopped twice. Fight ended at 2:47 of the first round.

Next show this promoter put on was March 30, 2019, in DE. Brandon Mullins, 3-0, stopped Hassan Haggler, 1-2, at 2:16 of the first round, from West Virginia, stopped in his last 2 bouts in the first and second rounds. Haggler suspended for “severe lack of skills”.

Stefan “The Freak” Talabisco, 2-0, stops 42 year-old Michael Shanks, 6-31, at 1:35 of the second round having gone down for 3 times. Prior to this he was stopped some 24 times. Shanks was suspend due to “lack of skills”. He had 37 fights before this. Another tank job?

Taylor Krahl, made his debut stopping 38 year-old Dameron Kirby, 0-3, 10 days past a 45 day suspension in his previous fight. He had been stopped in all 3 bouts. Kirby stopped at the end of the second round.

In the main event former world contender Hector Camacho, Jr., 58-7-1, with 32 stoppages scored a first round stoppage at 2:07 of the first round over Dominican Victor Abreu, 9-5, stopped 4 times. Abreu was put on a one year suspension due to “failure to perform!” Other words he “fell down!”

The co-feature brought back Stefan “The Freak” Telabisco, 3-0 (3), stopping Machiavelli Farrakhan Siberius, 0-5, stopped in 4 previous fights, from Parkersburg, West Virginia. None of his previous 4 stoppages lasted 2 rounds. This one lasted 1:45 of the first round. “The Freak” gains his fourth straight stoppage.

Alabama should be ashamed to have allowed opponents of this nature to come in. They said after this show “we aren’t coming back due to high costs!” Thanks for the memories!

Whether this promoter comes back and with the same matchmaker is up in the air.

It’s been proposed by long time boxing resident Dave Ruff that he, former WBU champion Mike “No Joke” Stewart and former boxer and commission worker Greg Hackett be formed as the new commission. They are waiting for the lone person on the DE commission to reply. 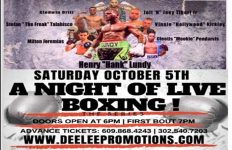 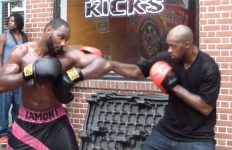 A Night of Live Boxing: “The Series”→ 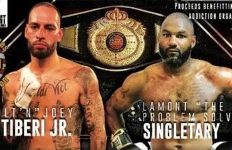