Dickie Ryan started out like most fighters. He had about 15 amateur fights, but was going to quit and take a fulltime job in a factory in Omaha. One day he was hitchhiking in Nebraska and legendary boxer Bruce “the Mouse” Strauss picked him up. Strauss remembered Dickie Ryan: He said, “You’re Dickie Ryan, the amateur from Omaha.” And Strauss got him back into boxing. Strauss is a very knowledgeable guy about boxing, according to Dickie and others.

Dickie had a good pro record of 54 and 10. He fought a major heavyweight named Brian Nielsen from the Netherlands and stopped him after doing the rope-a-dope like Ali did against George Foreman. Nielsen was 49-0 at the time having equaled Rocky Marciano’s record. Dickie went on to fight guys like Buster Douglas, Shannon Briggs, and other notable heavyweights. He gave a good account of himself in most of these matches. He was also a sparring partner for George Foreman and Olin Norris, where he also made a good account of himself.

Ryan told me he looks up to Julio Cesar Chavez and also looks up to the current Omaha champion Terrence Crawford; he looks up to Crawford because he’s the first Omaha fighter to become a champion. When I did this interview, Dickie Ryan was working as a security guard at a venue in Omaha, where legendary rock band Kiss was playing. Dickie also had a part in the Mouse Strauss movie “The Mouse.” He said that became one of his favorite movies.

It was a great interview with Dickie Ryan. I’d like to thank him for taking the time to talk with me while he was working. Way to go, guy! 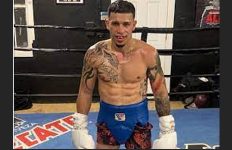