In the third round Bivol kept pumping his jab looking for an opening as Pascal did much feinting but little throwing. Bivol landed a double left hook to the body of Pascal. Pascal missed wildly with a left hook getting off balance. Bilov landed a lead right to the chin of Pascal. In the fourth round Bilov landed a chopping right to the head of Pascal knocking him to the canvas. Pascal was able to get thru the round.

In the fifth round Pascal looked like he was ready to go. He tried fighting back but Bivol started everything with a solid jab landing a left hook to the body. In the sixth round Pascal landed a combination. Bivol kept the jab in the face of Pascal. Pascal missed with a wild right and Bivol countered with a right of his own. Bivol landed a solid left hook to the head of Pascal just prior to the bell.

In the seventh round Bivol landed a flurry of punches. Bivol landed four punches to the body and head of Pascal. Pascal’s legs are gone fighting on instinct. In the eighth round Pascal came out landing a dozen unanswered punches. Bivol came back to hurt him with a right to the chin making Pascal hold on. Pascal landed a lead right on the chin of Bivol.

In the ninth round Pascal missed with a right and was countered by a Bivol combination. Pascal looked to his right landed a left hook at the bell. In the tenth round Pascal decided to make a fight of it as both fighters flurried. Bivol had swelling under his left eye. Pascal landed half a dozen unsnsered punches mostly to the body of Bivol.

In the first round Kuzmin pressed the action with both fighters exchaning left hands. Kuzmin chased Mitchell throught the round. In the second round Kuzmin landed a straight right on the chin of Mitchell getting his attention. They clashed heads with Mitchell complaining of a cut. Mitchell came back landing a solid left to the chin of Kuzmin.

In the third round Kuzmin rocked Mitchell with a left hook to the chin. Mitchell continued to keep moving with Kuzmin stalking him. Both fighters threw at the same time with Kuzmin’s right getting there first dropping Mitchell to a knee. He got up at 8 complaining of a cut left eye. Cut-man Joey Eye worked on Mitchell’s cut. In the fourth round halfway thru Mitchell finally stopped running mixing it up before going back to running.

In the fifth round Kuzmin hurt Mitchell fighting inside with several right uppercuts. Mitchell looked spent rubbin his left eye cut. Kuzmin landed a pair of rights with Mitchell going to a knee.

Mitchell was checked by ring physician between rounds. In the sixth round Mitchell came out fighting Kuzmin inside before getting on the run again. Kuzmin dropped Mitchell with a left hook to the chin. Referee Eddie Claudio waved it off without a count.

In the co-feature WBA Inter-Continental Super Bantamweight Champion and 2016 Olympic Bronze Medalist southpaw Murodjon Akhmadallev, 5-0 (4), of Namangan, UZB, stopped southpaw Isaac “Dinamita” Zarate, 16-4-3 (2), out of San Pedro, CA, at 1:17 of the ninth round.

In the third round Akhmadallev rocked Zarate with a combination to the head. Zarate had little power to hold him off. In the fourth round Zarate landed a right cross to the chin of Akhmadallev. Akhmadallev pushed down the head of Zarate until he finally got warned by referee Eric Dali.

In the seventh round Akmadallev warned a second time for pushing off. Zarate landed several uppercuts. Akmadallev rocked Zarate with a left on the chin. In the eighth round Zarate used an effective jab to keep Akhmadallev at bay for the first half of the round. Akmadallev landed a solid right uppercut to the chin of Zarate. Akmadallev ended the round with a straight left to the chin rocking Zarate.

In the ninth round Admadallev was rocked with a wild right hook causing referee Dali to halt the fight. Zarate was not pleased.

Super Welterweight Israil “The Dream” Madrimov, 1-0 (1), of Khiva, UZB, made his debut stopping Mexican southpaw Vladimir “24k” Hernandez, 10-3 (6), out of Denver, CO, for the vacant WBA Regional Super Welterweight title, at 1:24 of the sixth round of a scheduled 10 rounds.

In the first round Hernandez did most of the punching as Madrimov did quite a bit of missing. Everytime Madrimov landed a punch his fans cheered. In the second round Madrimov went to the mid-section with a jab or right hand. Hernandez had a cut over his right eye from a Madrimov right. Madrimov landed a solid left hook to the chin of Hernandez. He followed up with a flurry of punches hurting Hernandez who came back with one punch at a time. The ring physcian checked Hernandez between rounds.

In the fifth round Madrimov rocked Hernandez with a lead right on the chin. Hernandez’s cut causing his right eye to startin to close. Hernandez got in the final punch a left uppercut to the chin of Madrimov. In the sixth round Madrimov landed a solid right while Hernandez came right back with a left of his own. Suddenly a “brawl” broke out with both throwing bombs with Hernandez getting the worst of it. Suddenly referee Dock waved it off. Hernandez was not pleased but took a lot of punishment. Madrimov did a couple of back flips for his fans.

In the first round Delgadillo was the aggressor. In the second round Delgadillo continued throwing punches halfway thru the round until Dargan hurt him with a combination. A lead right from Dargan dropped Delgadillo seconds before the round ended. He got up and referee Eddie Claudio gave him the count when the bell sounded.

In the third round Delgadillo and Dargan mixed it up. Dargan landed the more effective punches but it was a close round. In the fourth round both fighters mixed it up more than in any previous rounds with Dargan boxing better as Delgadillo threw more punches.

Dargan seemed to take the sixth with Delgadillo edging him in the seventh.

In the first round the much taller Tishchenko at 6’5″ stalks Mariscal with a jab in his face and right hand uppercuts to the body along with looping left hands to the chin. In the second round Tishchenko continued with even more punches until a straight left on the chin of Mariscal knocked im down. He made an effort to get up but didn’t quite beat the count of referee Harvey Dock.

In the first round Yoon hurt Sempewo with a lead left on the chin. Yoon continued working the body and head. Sempewo landed one of his few punches a lead right on the chin near the end of the round. In the second round Yoon continued a stead attack using his jab following with lefts to the chin of Sempewo. Yoon landed several right uppercuts. He continued to outwork Sempewo. Yoon landed a 3-punch combination with the final punch a hard left on the chin rocking Sempewo at the bell.

In the third round Yoon pinned Sempewo against the ropes with a good body attack easily taking the round. In the fourth round Yoon dropped Sempewo twice. He was very unsteady both times after beating the count of referee Eric Dali.

In the fifth round a jaab from Yoon had Sempewo’s left leg raised up. Sempewo was just hanging in there as Yoon hurt him with a right hook to the chin. A straight left from Yoon rocked Sempewo as referee Dali wisely stopped the fight.

Kathy Duva is CEO of Main Events and Jolene Mizzone is the matchmaker. 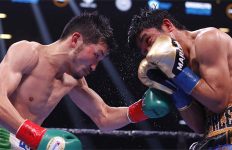