In an action packed first round Sanchez seemed to show more polish with double left hooks to the body and head. Halfway through the round it was Saavedra landing half a dozen unanswered punches pinning Sanchez against the ropes. Saavedera turned southpaw and never missed a beat. In the second round Saavedera kept up out of southpaw working the body and head of Sanchez well. Just under a minute left in the round a right uppercut to the chin of Sanchez rocked him. Just prior to the bell, Saavedra landed a 3-punch combination ending with an overhand right to the chin of Sanchez who had a mouse under his left eye at the end of the round.

In the third round Sanchez came back well. Halfway through the round Sanchez landed a left hook to the chin of Saavedera moving him back several steps. Sanchez used his quicker hand speed but Saavedra would switch from southpaw to orthodox. Sanchez had a very good round landing with the left hook to the body. In the fourth round Sanchez was having his way until the halfway point when Saavedra rocked Sanchez with a right cross on the chin. Sanchez came back well up until the final half minute left in the round when Saavedra rocked Sanchez into the ropes. Sanchez had a bad habit of backing into the ropes where Saavedra worked him over.

In the fifth round Saavedra would follow Sanchez to the ropes while the trainer of Sanchez Joel Diaz was yelling “stay off the ropes”. Sanchez halfway through the round landed some fine uppercuts to the body of Saavedra. Sanchez ended the round landing well. Saavedra was bleeding from the nose by the end of the round. In the sixth round Saavedra the taller of the two from southpaw worked the body of Sanchez with hard right hooks to the body. Halfway through the round Sanchez knocked the mouthpiece of Saavedra out. Saavedra seemed to come back well due to the break. Sanchez hurt his left hand in the round.

In the seventh round Sanchez used good inside work coming off the ropes but Saavedra switching back and forth seemed to confuse Sanchez somewhat. Sanchez had Saavedra bleeding from the nose and now the mouth in a real slugfest.

In the eighth and final round with the fight possibly on the line both fighters let it all out exchanging punches with one and then the other taking charge. The second half of the final round they had the fans yelling due to the action. Raul Caiz, Sr. was the referee.

“I hurt my left pinky in the sixth round. He was a tough opponent and realized it would go the distance which I was ready for,” said Sanchez. Seemed Sanchez pulled the fight out in the last two rounds.

In the first round Rivera used left hooks to the body of Ramos. A double left hook knocked Ramos into the ropes. The referee Ray Corona gave Ramos a standing count. Rivera jumped on Ramos landing a dozen unanswered punches having Ramos out on his feet defenseless on the ropes when the referee Ray Corona stepped in to prevent any further punishment.

In the first round Torrez at 207 lbs giving away 50 lbs to Soto at 257 lbs used a solid jab as Soto came out swinging wildly. Soto boxed well the second half of the round keeping Soto on the receiving end. In the second round Soto back Torrez up with a pair of jabs followed by a right to the chin of Torrez. Torrez at the halfway point used his quicker hand speed to keep Torrez from landing anything big after that. Under a minute Soto landed a good left hook stunning Torrez. Torrez ended the round with a right to the chin of Soto.

In the third round Soto rushed Torrez who avoided most of the punches. Torrez landed a combination left hook to the body and right to the jaw of Soto dropping him for the 8 count from Referee Ray Corona at the halfway point. Torrez landed short chopping rights when both were tangled. Referee Ray Corona warned Soto for hitting Torrez in the back coming out of a clinch. In the fourth and final round Torrez took over the fight as Soto looked like he was gasping for air getting hit with double left hooks to the body and head. Soto did a lot of holding in the halfway to the end of the fight. Torrez rocked Soto with a chopping right to the head under a minute left in the fight. Torrez ended the fight with a left hook to the chin of Soto.

In the first round Lopez got inside landing well to the body of Cevera. Lopez was much quicker than the former MMA fighter Cevera. He laned well the second half of the fight with combinations. In the second round after about twenty seconds a right hand from Lopez rocked Cevera who immediately grabbed Lopez into a clinch. Cevera bulled Lopez into a corner but a left hook to the chin backed him up.

In the third round Lopez worked the body of Cevera with left hooks. Into the second half of the fight while Cevera tried bullying Lopez into the ropes got hit with a double left hook to the body and chin. In the fourth and final round Cevera was never in trouble of not going the distance as Lopez slowed down in the final round but did enough to win the round. Ray Corona was the referee. Lopez was 20-10 in the amateur and seems to have raw talent that needs to be kept busy. 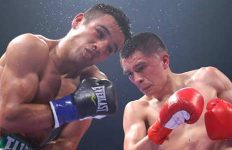 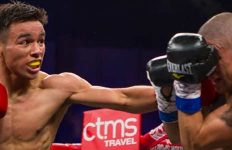