Listen to “RINGSIDE BOXING SHOW How angry was Wladimir Klitschko when Shannon Briggs knocked him off his paddleboard? Johnathon Banks reveals all” on Spreaker.

How upset was heavyweight champ Wladimir Klitschko after Shannon Briggs used a power boat to knock him off a paddle board .. disrupted his press conferences … and stole food from Klitschko’s plate at a restaurant? Trainer Johnathon Banks gives us a fly-on-the-wall perspective as he joins us for a candid, in-depth interview about his time with Klitschko, what it’s like training five-time women’s champ Cecilia Braekhus, what it was like to walk into Kronk Gym for the first time as a teenager, and several other topics.

We also treat you to our weekly report from British correspondent Paul McLaughlin, an update on the lively boxing scene in the United Kingdom.

And we open with a lively round-table discussion with expert analysts Travis Hartman, Rizwaan Zahid, and Danny Serratelli (sitting in this week for John J. Raspanti) addressing the emotional buildup to Canelo-Golovkin II, who wins the Sept. 8 showdown between Danny Garcia and Shawn Porter, John David Jackson’s aggressive verbal assault on Sergey Kovalev, Shane Mosley’s opinion that Mikey Garcia is a courageous fool for pursuing Errol Spence Jr. (an opponent 12 pounds to his north), and Golden Boy’s disastrous debut with Facebook’s streaming platform, which crashed Saturday night for four rounds of a good fight between JoJo Diaz and Jesus Rojas.

Dennis Taylor is host of The Ringside Boxing Show, editor-publisher of www.ringsideboxingshow.com, and co-author (with John J. Raspanti) of “Intimate Warfare: The True Story of the Arturo Gatti and Micky Ward Boxing Trilogy,” an Amazon bestseller. 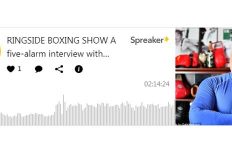 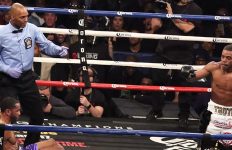 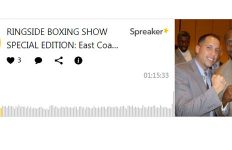