At the historic Madison Square Garden Saturday night the best pound for pound boxer in the entire world Vasyl “Hi-Tech” Lomachenko, 11-1 (9), of UKR and Oxnard, CA, gained his third division title stopping previously WBA Super World Lightweight champion Jorge “El Nino de Oro Golden Boy” Linares, 44-4 (27), of VZ and Tokyo, JAP, with a 10th round stoppage at 2:08 of the round.

It was a savage fight between two world champions with the score cards showing the bout even going into the 10th round with each fighter given an edge 86-84 and the third judge having it 85-85. In the third round Linares was bleeding from the nose.

In the sixth round after Linares was warned by the referee for a low blow he dropped Lomachenko who fortunately was at the end of the round. By the eighth round it was the face of Linares that was swollen and bruised.

It was the body shots in the 10th round by Lomachenko that proved to be the downfall of the champion, Linares. The uppercuts landed by the newly crowned champion took whatever was left of Linares while a left to the body dropped Linares.

The two-time Olympic Gold Medal winner Lomachenko is scheduled for an August 25th title defense at the Forum, in Inglewood, CA, with an opponent to be determined. Evens “The Sun City Kid” Pierre, 29-1 (19), out of Port-au-Prince, Haiti, is the No. 1 WBA contender.

At the Turning Stone Resort & Casino, in Verona, NY, Saturday night the late sub No. 4 contender Jaime Munguia, 29-0 (25), of Tijuana, MEX, upset World Super welterweight champion Sadam “World Kid” Ali, 26-2 (14), dropping him four times in the fourth round with an official 1:02 stoppage. It was his 19th stoppage in his last twenty fights for the newly crowned champion. 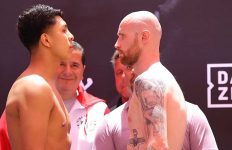