MONTREAL – Oct. 23, 2017 – There was a lot of hostility in the air today, while the WBO World Middleweight Champion Billy Joe Saunders (25-0, 12 KOs) and former IBF World Middleweight Champion David Lemieux (38-3, 33 KOs) were hosting a press conference to discuss their upcoming showdown to be held on Dec. 16 at the Place Bell in Laval, Quebec. Saunders vs. Lemieux is presented by Golden Boy Promotions and Eye of the Tiger Management, in association with Frank Warren, and will be televised live on HBO World Championship beginning at 9:40 p.m. ET/PT.

Here is what the participants had to say at today’s press conference:

“This fight has good fight written all over it. There is a lot at stake. I’m going to be very aware because as you all know, boxing is a funny game, it can end very quickly with one punch. And it goes both ways. David is going to eat some, and he’s going to beg me to finish him off.

“Styles make fight. It’s the classic match-up between the boxer and the puncher and I’m looking forward to it. I was born to fight, and I’m going to prove it by unifying the belts as soon as I’m done with David.

“Lemieux shows a lot of heart when he comes to fight but the real truth is, I’m to slick and too good for him. I’m in boxing to win and defend my belt all over the world, Lemieux is my tester for the winner of Canelo and Golovkin. “

“I think that you are in for a surprise. I will be at my best and take the title from you.

“Billy wants to fight Golovkin and wants to measure himself against Lemieux. It’s a great test for him.

“David is a great fighter, big puncher and a clever boxer. Billy is in a very good place and he’s had some brilliant training and a great camp so far. He is super confident to put on a great show. Hopefully, Dec. 16 is going to be a great night of boxing!”

“I’m proud to train a boxer such as David Lemieux, who is a true warrior, a real champion, always up for real challenges. As soon as we found out that facing Canelo wasn’t an option, we started looking at other options. David’s request was clear: ‘I want to face the best fighter available.’ And, we found it in Saunders, and it’s going to be a good challenge for David. Once again, he will give the fans a show to remember and a beautiful Christmas gift.

“This fight is a great opportunity for David to write history and follow the steps of great Arturo Gatti, by becoming two time World Champion.”

Camille Estephan, president of Eye of the Tiger Management:

“We promised our fans to host a championship fight and we delivered. We would like to thank our great partners, HBO, Golden Boy Promotions, Videotron and evenko who made it possible.

“We also promised that David would become World Champion again, and I guarantee that we will keep our promise. We are glad to inaugurate the Place Bell with this terrific boxing event. We will write history together on Dec. 16.”

Saunders vs. Lemieux, a 12-round fight for Saunder’s WBO World Middleweight Championship, is presented by Golden Boy Promotions and Eye of the Tiger Management in association with Frank Warren Promotions. The event will take place Dec. 16, at the Place Bell in Laval, Canada and will be televised live on HBO World Championship Boxing. Tickets will go on sale on Saturday, October 28 at 12p.m. at www.evenko.ca. 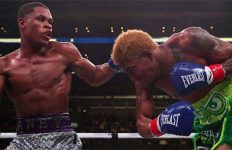 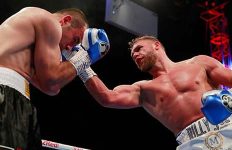