In the first round there was no feeling out as both fighters opened up on one another. Halfway through the round Avalos landed several right uppercuts to the chin of Santa Cruz. It wasn’t until the ten second warning that Santa Cruz finally landed a 3-punch combination. In the second round both started going to the body with Avalos busier of the two. With half a minute to go in the round Santa Cruz landed a flurry of punches. In the third round Santa Cruz started to go to the body of Avalos knowing he had a granite chin.

In the seventh round after half a minute Santa Cruz rocked Avalos with a pair of right hands to the head. Several times in the round Santa Cruz had Avalos holding on. In the eighth round Avalos started coming forward trying to put some offense into his arsenal only to be pounded in return by Santa Cruz after the first two minutes of the round. Suddenly the referee Thomas Taylor stepped in after half a dozen punches were landed by Santa Cruz to the disappointment of Avalos.

“After a long lay-off (9 months) I felt I might stop him in the fourth round. Now we are ready for Mares in a re-match,” said Santa Cruz.

In the first round Mares opened up with left hooks to the head and body of Gutierrez. More than halfway through the round Gutierrez landed his best punch a left hook to the mid-section of Mares. At the 10 second warning both fighters landed left hooks to the head at the same time. In the second round both fighters were throwing left hooks but Mares was too quick for the slow footed Gutierrez. Gutierrez suffered a cut by his left eye with a minute left in the round from a right hand by Mares. At the end of the round Gutierrez went back to his corner with the left side of his face smeared with blood. In the third round Mares continued with lead rights on the left eye of Gutierrez re-opening the cut. Mares kept throwing combinations with the defensive minded Gutierrez hands held high with an occasional left hook in return. It was another winning round for the champion Mares.

In the fourth round Mares continues to throw punches with bad intentions to a bewildered Gutierrez who cut was opened again. An overhand right from Mares on the top of the head stunned Gutierrez. After the bell Mares landed a punch and was warned by referee Jack Reese. In the fifth round Mares continued on the attack with every right hand landing on the left side of Gutierrez head on the cut. Gutierrez kept coming forward but being countered time and time again to the head by Mares. Mares couldn’t miss with his right hand to the head of Gutierrez. Prior to the start of the sixth round the ring physician was still checking Gutierrez when the bell sounded to start the round. Mares picked up where he left off in the previous round. With a minute left Gutierrez landed a solid right uppercut to the chin of Mares. At the ten second warning Gutierrez landed a double left hook to the head of Mares who countered with another right to the head.

In the seventh round Mares landed a lead right to the head of Gutierrez stunning him. The gutsy Gutierrez kept coming forward while taking plenty of punishment from Mares. With just under a minute left in the round Gutierrez landed a 3-punch combination. Just prior to the end of the round a lead right from Mares to the left side of the neck rocked Gutierrez. In the eighth round Gutierrez was coming forward with little offense as Mares continued to use his hand speed with power mostly to the head. The cut over the left eye of Gutierrez was opened one more time as Mares kept landing the right hand there. A minute into the ninth round Mares landed a 3-punch combination to the head of Gutierrez. Mares had to be wondering what was keeping Gutierrez on his feet.

In the tenth round Mares may have been arm weary from the steady attack he had done through nine rounds on Gutierrez by moving with throwing little. At the halfway mark of the round Mares started throwing punches with Gutierrez taking a beating. With half a minute left in the round Mares landed a solid left hook to the head of Gutierrez making the blood flow down the left side of his face. Referee Reese wisely stopped the action calling in the ring physician who called a halt of a wide sided fight. The referee claimed an illegal punch ended the bout to the mystery of all concerned. With trainer Robert Garcia for his second fight Mares looked unbeatable. Gutierrez showed plenty of heart but was a punching bag through the entire fight.

Mares said he wanted Leo Santa Cruz to win following his bout so they can get a rematch to their war two years ago.

In the first round DeMarco was on the attack from the opening bell swarming all over Eddie Ramirez knocking him into the ropes with a right hook when referee Jarrett Wright stepped in waving it off.

DeMarco thanked “his trainer and God” for the win. 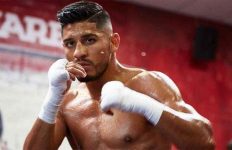