LOS ANGELES (April 25, 2017) – Fighters featured on the undercards of the highly anticipated Canelo vs. Chavez, Jr. showdown today hosted a Los Angeles media workout at City of Angels Boxing ahead of their upcoming fights on May 6 at T-Mobile Arena, live on HBO Pay-Per-View. Plus, fighters featured on Golden Boy Boxing on ESPN on May 5 at the MGM Grand Garden Arena joined the action today also to discuss their upcoming bouts.

The May 5 action-packed night of Golden Boy Boxing on ESPN will be headlined by former three-division world champion Yuriorkis Gamboa and Robinson Castellanos. Co-main event of the night, Abraham “Chamaco” Lopez (22-0-1, 15 KOs) will defend his NABA featherweight title against Jesus Rojas (24-1-2, 17 KOs). Oscar “El Jaguar” Negrete (15-0, 6 KOs) will be participating in the card in a 10-round bantamweight bout, and knock out artist Vergil Ortiz, Jr. (4-0, 4 KOs) will be in a four round super lightweight fight against Angel “Pescado” Sarinana (7-5-2, 3 KOs).

Below is what the fighters had to say at today’s workout alongside Golden Boy Promotions Chairman and CEO Oscar De La Hoya:

“I’m excited to see every undercard fighter on fight night. I love knockouts, so you can’t go wrong with our co-main event of David Lemieux against Marco Reyes. Lemieux just had a spectacular knockout over Curtis Stevens that was incredible, so I’m looking forward to seeing him in the ring again.

“This is going to be a great show, and I think everyone is going to be very excited. Golden Boy has a great reputation for putting on amazing fights, and the fans will definitely be getting their money’s worth.”

“I never once thought about retiring. I just needed a deep rest after the Postol fight in October, so I went back home and took the time I needed to be with family–I drove my motorcycle, went fishing, and just reflected.

“I am proud of the career that I have made – I am a South American fighter coming from a province in Argentina who has made himself known in America. It is a privilege to be back on such a card like this, and my goal is to continue to be in the sport, on track for a championship. I am ready to jump back in.”

“Fighting on this Canelo vs. Chavez, Jr. card has been the opportunity of the lifetime for me. I have to go out there with millions watching and thousands in attendance, so I have to showcase to everybody that I can be the best and the next superstar in boxing.

“I trained very hard for this fight, so a win over Manuel Avila will put me a step closer or maybe even give me that title shot for either the WBC or WBO belt. I know my opponent is an undefeated Golden Boy prospect, so there is a lot at stake for whomever wins this fight, as they will become ‘the next big thing’ at 126 pounds for Golden Boy Promotions. May the best man win on May 6th.”

“I’m different from everybody, my speed is incredible. If you get the chance, check me out because I bring something different to the table. People may watch a lot of fighters, but nobody sees someone with my explosiveness and speed.”

“Everyone will say the same thing–that they just want to get their first professional fight out of the way. I am excited to be a part of the Golden Boy family, and being on HBO–it’s a dream. I’ve been training with Manny Robles and I feel ready to take on my opponent.”

“Everything has been great–I just had my son, which is extra motivation for me. I’m at 122 pounds now, because after my loss, my motivation and discipline went way up.

“In working up to this fight, I’ve been training and eating healthier than ever. I believe I will be well prepared to take on my opponent on May 6 at T-Mobile Arena in Las Vegas.”

“I’ve been training over a year with Joel Diaz, and have been sparring with Lucas Matthysse and Vergil Ortiz, Jr. to prepare for our fights on May 6th. I have about 200 people coming from Mexico to see me fight, so I’m really excited.

“My fighting style with Joel Diaz has adjusted as he has taught me to be more aggressive and to have a winning mentality in the ring.”

“I get to defend my NABA title for the second time. I’m thankful to God for the opportunity, and at the end of the day, he already knows what’s going to happen that night, I just have to do what I always do and prepare and train harder than I have.”

“It’s a great privilege to be on ESPN, I know that it’s going to be a great fight. I get the chance to represent Colombia and show what I have to offer in the ring. I’ve developed a lot as a fighter, and I just can’t wait for next week.”

“I’ve been feeling really good lately and have been training since February so I’m in the best shape of my life right now. It feels really to be on such a huge fight card. When I fought on the last Canelo undercard, it was huge for me-it still takes some adjusting, but I feel great.

“My last four fights have all been knockouts, but I’m not going just for the knockout, I’m going in to be smart. I expect my opponent to go forward and bully me, but it’s not always about strength-I know I will figure him out.”

Golden Boy Boxing on ESPN: Gamboa vs. Castellanos is a 10-round lightweight fight presented by Golden Boy Promotions in association with ZR Entertainment and sponsored by Tecate BORN BOLD. ESPN Deportes will transmit the fights live on Friday, May 5 from the MGM Grand Garden Arena at 4:00 p.m. PST/7:00 p.m. EST, and ESPN2 transmission will begin at 5:00 p.m. PST/ 8:00 p.m. EST.

May 6: Tickets for the closed circuit telecast of Canelo vs. Chavez, Jr. are priced at $75, not including applicable fees. All seats are general admission and tickets are available for purchase at any MGM Resorts International box office or concierge desk. Tickets also can be purchased by phone with a major credit card at 800-745-3000. Tickets for “Canelo Alvarez vs. Julio Cesar Chavez, Jr.” in theaters nationwide are on sale now at www.FathomEvents.com or at participating theater box offices. Fans throughout the U.S. will be able to enjoy the event in select movie theaters through Fathom’s Digital Broadcast Network (DBN).

May 5: Tickets starting at $10 for Golden Boy Boxing on ESPN are on sale now and include complimentary VIP reserved seating at the Canelo vs. Chavez, Jr. Weigh-in. Ringside seats for fights only are priced at $30. To charge by phone with a major credit card, call the AXS Contact Center at (888) 929-7849 or MGM Resorts Call Center at (877) 795-2564. Tickets are also available for purchase online at www.axs.com or www.mgmgrand.com and in person any MGM Resorts International box office.

The premiere of the HBO Sports presentation Face Off with Max Kellerman: Canelo/Chavez Jr. airs Saturday, April 29 at 12:15 a.m. on HBO. 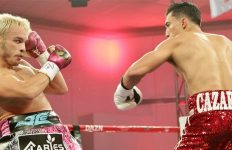