Dariusz “Tiger” Michaelczewski from Poland fighting out of Germany who was the WBO light heavyweight champion got to 48-0 before losing to Julio Cesar Gonzalez, 34-1, taking a split decision in Germany.

Few have shown the bitterness that Larry “The Easton Assassin” Holmes of Easton, PA, did when at 48-0 he was the first heavyweight champion to lose to a light heavyweight champion in Olympic Gold Medalist Michael Spinks, 27-0, in 1985. To this day you never hear Holmes give Spinks any credit. He simply says “Marciano couldn’t wear my jock strap” blaming his loss on Marciano! At a press conference in 2016 he was still saying “I never chased Marciano’s record!” Bullshit. You wonder why Ali nicknamed him “Peanut Head?”

Mexico’s Ricardo “Finito” Lopez was 47-0 when he was held to a technical draw defending his WBA and WBC minimumweight titles, against Rosendo Alvarez, 24-0-1, of Nicaragua in 1998. In his next fight he defeated Alvarez by a split decision. Lopez would win his next four fights including winning the IBF World light flyweight title and finish at 51-0-1. Mexico’s Luis “Yori Boy” Campas, went beyond 49-0 before losing to Felix “Tito” Trinidad, 23-0, and his IBF welterweight title when he was 56-0 in 1994. He would finish up at 106-17-3. 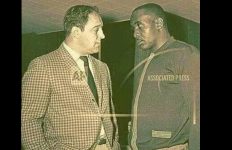