Holyfield and Wilder share a connection. Both were born in Alabama – Holyfield in Atmore and Wilder in Tuscaloosa, where he still resides. Holyfield has followed Wilder’s career since the 31-year-old champion was a member of the U.S. boxing Olympic team and won a bronze medal at the 2008 Beijing Games.

There is another Olympic connection between Holyfield and Ugonoh’s trainer, Kevin Barry. Holyfield and Barry met in the semifinals of a light heavyweight bout at the 1984 Los Angeles Olympic Games. The match was marred by controversy after Holyfield was disqualified in the second round for hitting Barry on the break. Because of the disqualification, Holyfield won the bronze medal for the U.S. team in the 1984 LA Games.

The fourth installment of PBC on FOX features the two heavyweight bouts, as well as a junior middleweight title fight. Once-beaten Tony Harrison (24-1, 20 KOs) and undefeated Jarrett Hurd (19-0, 13 KOs) battle in a 12-round affair for a vacant 154-pound world championship.

Working with NextVR, the two-hour PBC on FOX show is also broadcast live in virtual reality. For the second year in a row, multiple cameras set up around the ring capture the action in immersive, high-definition virtual reality, providing fans with the best seat in the house. The PBC on FOX boxing experience is available for free through the NextVR app. Fans with a Google Daydream or Samsung Gear VR headset, along with a compatible smartphone, can access the virtual reality experience by downloading the NextVR app from the Oculus or Google Play Stores.

Once the fights are done on FOX, the boxing continues for two more hours on FS1 & FOX Deportes, with Kenny calling the action with analysts Mares and Hunter. That show is headlined by unbeaten prospect Caleb Plant (14-0, 10 KOs) against Ghana’s Thomas Awimbono (25-6-1, 21 KOs) in the 10-round main event. 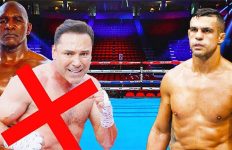