Before a sellout crowd and then some boxing made their debut at the SugarHouse Casino in Philadelphia Friday night with 10 bouts. Hard Hitting Promotions continues to put on good and competitive bouts headed by Manny Ramirez with Will Ruiz doing the matchmaking.

In the first round was close with each fighter having their moments. In the second round Santiago rocked Alvarez with a right hand to the chin. The fans are pro Santiago and he is started to pick it up. In the third round Santiago did enough to take the round. In the fourth round the 19 year-old Philly boxer came out and scored with left hooks and chopping rights to the head of Alvarez. Santiago got rocked halfway through the round by Alvarez who out of the southpaw position landed a powerful straight left to the chin of Santiago having him grabbing Alvarez not recovering well the rest of the round.

In the fifth round both fighters had their moments but it looked like Alvarez may have pulled it out. In the sixth round Alvarez seemed to outwork Santiago. In the seventh round it was back and forth with Alvarez once again outworking the younger Santiago who may be running out of gas. In the eighth and final round it was the best of the fight. Santiago hurt Alvarez who was on the ropes. When Santiago hurt him the fans roared and Alvarez tied up Santiago and looked over to Santiago’s cheering section and came right back firing punches. It was a close round.

Judge’s Adam Friscia had it 79-73 while Lindsay Page and Alan Rubenstein had it 78-74 while this writer had it 76-76. Since changing trainers Santiago has had a pair of lack luster performances. He dropped the best trainer in Philadelphia in Bozy Ennis to return to bringing in his father who had him for his entire amateur career. Only on rare occasions does a father and son corner work out and this doesn’t seem to be one of them as of yet.

In the first round Lopez may have had the edge with both landing well. In the second round it could have gone either way with Bendana taking more chances but Lopez landed well in a close round. In the third round Bendana landed good combinations in taking the round.

In the fourth round Lopez came alive and had Bendana hurt at different times during the round. In the fifth round Bendana landed a low punch and was warned by referee Clark giving Lopez a short rest. Lopez came back just before the bell landing a big right driving Bendana several steps back into the corner. In the sixth and final round Lopez rocked Bendana with a left uppercut and came back with a right rocking Bendana who seemed to have run out of gas.

In the opening round Nevin landed a dozen punches without return having Lule hurt but he backed off. Nevin was landing a high percentage of his punches and gliding around the ring like a much more experienced pro though having several hundred amateur fights. In round two Lule must have been given a pep talk by his corner for he came out landing more punches as Nevin was staying stationery. Only problem is as Nevin turns his back the referee Clark allowed Lule to punch him there which is illegal before finally warning him. In the third round Nevin got back into it landing the more effective and harder punches as Lule came in attacking the body bit being hit almost at will by Nevin.

In the fourth round Nevin was slipping punches and rocking Lule again and again. One would wonder what’s holding Lule up? In the fifth round Lule continues to come forward showing a lot of heart but he is met with a barrage of counter punches. An overhand right by Nevin rocked Lule. Shortly afterwards a left hook by Nevin rocks Lule again. In the sixth and final round Nevin continues to counter the oncoming Lule who did all he could do to hang in there but was outgunned from the third round on and losing the first round. The fight was entertaining.

All 3 judges had it 60-54 with this writer scoring it 59-55. Nevin looks like a good prospect. Only one of his fights was held back in Ireland. He is currently living in Pennsylvania.

In the co-feature Super featherweight Luis “Popeye” Lebron, 6-0-1 (3), of San Juan, PR, came into the ring with the promoter and matchmaker leading the way with American and Puerto Rican flags. One wondered what was going in the mind of Luckey. Lebrone did enough to win a majority decision over Tyrone “Braveheart” Luckey, 8-6-4 (5), of Neptune, NJ, over 6 rounds. I believe the fans and this writer expected more out of Lebrone.

In the opening round it was Lebron doing the chasing but landed very few punches as Luckey got lucky taking the round. In the second round Lebron got Luckey’s attention with a lead straight right hand. Luckey returned the favor with a left hook of his own. In the last minute of the round Luckey rocked Lebron with a left hook to the chin. In the third round both fighters exchanged left hooks to the chin. Luckey was surprising the crowd with the way he is handling Lebron.

In the fourth round Lebron finally found the target rocking Luckey with a right hand to the chin. Luckey may have been tiring. In the fifth round it was close with neither fighter overpowering the other. In the sixth and final round with the fight up for grabs both fighters had to know this. Lebron rocked Luckey with a right hand knocking him back several steps. Luckey came right back and seemed to outwork Lebron the rest of the way.

In the opening round Martinez kept Capers on the ropes as he did in the second round getting come overhand rights to the head in. In the third round Capers turned the tables around having Martinez on the ropes and in the middle of the ring. Martinez is at his heaviest weight.

In the fifth round as Martinez came in to push Capers to the ropes he got hit with a left uppercut to the body. Referee Talmadge has his work cut out for him with a lot of inside fighting and grabbing one another. In the sixth and final round Capers went on the attack having Martinez on the ropes. Martinez got off the ropes and was backing Capers up. This has been a action round with both fighters trying to pull out the win.

In the first round Murray dropped Amaro with a powerful right hand to the chin. Murray is all action especially in the first round of his fights. Amaro beat the count of 10 but Murray was all over him punching him at will until referee Talmadge wisely stopped the fight.

In the opening round with both boxers fighting southpaw it was close but Cortes landed the more effective punches. In the second round Cortes was landing uppercut after upper cut rocking Barbosa whose timing seems way off. In the third round it was more of Cortes landing jabs and follow-up with lefts to the head of Barbosa. In the fourth and final round it had the most action with Barbosa having his best round but not good enough to overcome the pin point punches of Cortes.

All the Judge’s had it 40-36 as did this writer. Talmadge was the referee.

In the opening round it was all Carto but the southpaw Hernandez did a lot of holding and moving. In the second Carto rocked Hernandez with a left hook and he went after Hernandez. Carto almost dropped Hernandez with a right hand. He jumped on Hernandez until the referee Clark wisely stopped it. Carto is a cool and calm local crowd pleaser. Former PA GG champion Mickey Rosato was in the corner with Joey Eye working the cuts. Carto was an Olympic alternate and is a real prospect.

In the opening round Pizarro landed many more punches than Pierce who keeps throwing but with little accuracy. In the second round Pizarro picked his spots and punished Pierce who is no quitter. In the third round Pizarro had Pierce out on his feet with about 30 seconds to go in the round but Pierce managed to weather the storm. In the fourth and final round Pizarro was looking for the knockout but it didn’t come though he took the round. Good showing in his debut for Pizarro who has his father in the corner.

All 3 judges had it 40-36 as did this writer. Referee was Talmadge.

Bantamweight Laurie Shiavo, 1-0 (0), of Philadelphia, won an action packed split decision over Mary O’Leary, 0-1 (0), of Springfield, MASS, over 4 rounds. It could have gone either way.

The first two rounds the boxers seemed to split. In the third round again little could be seen. In the fourth and final round both boxers let it all hang out and it could end up in a draw in an all action fight.

This writer looks forward to Hard Hitting Promotions return to the SugarHouse Casino but placed in an area without so much traffic walking in front of them. All in all this promotion has not put on a bad show yet. 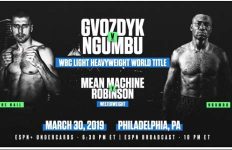 Philly Has Two Shows This Weekend and One World Title Bout!→ 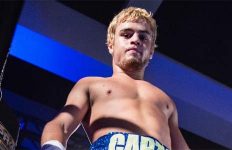 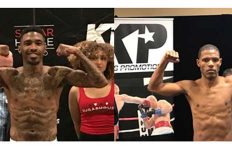