Where are they now? Ridgefield graduate and former boxer Leo Loiacono

Twenty years ago, Leo Loiacono never envisioned so much occurring so soon during his unforeseen professional boxing career.

Loiacono, a former football standout for Ridgefield High School, began boxing at a New York PAL at the urging of one of his semipro football teammates. Before he knew it, Loiacono was boxing in the 1994 New York Golden Gloves.

Four years later, with just 10 amateur matches and 16 pro bouts on his résumé, Loiacono was promoted by Don King and stood across the ring from former WBO heavyweight champion Ray Mercer. A gold medalist at the 1988 Summer Olympics, Mercer was one of the top heavyweights of his era, a hard-hitting ex-Marine many boxing observers believe beat Lennox Lewis in a May 1996 fight Lewis won by majority decision at Madison Square Garden.

Loiacono and Mercer, who had sparred against each other numerous times, fought for the No. 1 spot in the WBA rankings. The winner of their elimination match was supposed to receive a title shot.

Loiacono lost by second-round knockout that fateful February 1998 night in Miami. But reaching those heavyweight heights still was considered a successful run for a guy who didn’t box until he reached his mid-20s — after tryouts with the Cincinnati Bengals, Detroit Lions and CFL’s Toronto Argonauts produced no contract offers.

“I’m so proud of that,” Loiacono, 45, said. “To know that Ray was the 1988 Olympic gold medalist, the former heavyweight champion of the world and the No. 1 contender that year, it was an honor to fight him. Ray was someone I looked up to. Look at what he did to Tommy Morrison, what he did to Larry Holmes, even though he lost the fight, what he did to Lennox Lewis, what he did to Bert Cooper.

“Ray was a warrior. Ray was a bad [dude], man. I wish I could’ve given a better show. As a professional athlete, it hurt to lose. But to fight a world-class fighter like that, it was a thrill.”

The affable Loiacono, who played defensive end and defensive tackle for Jersey City State and Kean, fought just three times after facing Mercer. He ended his four-year pro career with a 16-4 record, including 13 knockouts, and credits former manager Vinny LaManna with much of his success.

“Leo was a very tough guy,” LaManna said. “And he had the looks and he had a big fan base. That was a big part of what allowed us to do a lot of things in boxing. As proud as I was for managing Imamu Mayfield when he won the IBF cruiserweight title, I’m just as proud of what Leo and I were able to do together.”

Loiacono’s involvement in boxing these days involves the sport’s conditioning drills while working with autistic adults and children as part of an after-school fitness program he helps run at The Children’s Institute in Livingston. Loiacono, a retired Essex County corrections officer, also works during school hours as an assistant one-on-one aide.

“It’s definitely rewarding work,” said Loiacono, who has three daughters, Dionna, 17, Olivia, 8, and Elianna, 2. “It makes you think about your life and think about your kids and appreciate everything that you have.”

Loiacono plans to pursue a master’s degree and would like to coach football at the high school level. He currently coaches Pop Warner in West Orange, where he and his family reside.

He also is open to acting again. Loiacono played a small role as a boxer in the 2009 film, “The Nail: The Story of Joey Nardone,” which starred Tony Danza, who went 9-3 as a middleweight from 1976-79.

“Boxing was supposed to be a fun thing for me, just to learn how to fight,” said Loiacono, who was ranked No. 15 by the WBA and No. 9 by the IBF when he fought Mercer. “I wasn’t looking to become a heavyweight contender or a world-rated fighter. Any success I had in boxing, it just kind of happened. It was a pretty crazy ride.” 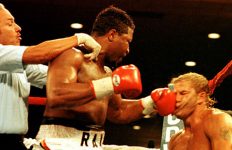 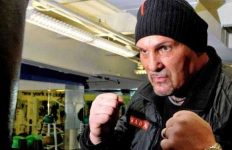 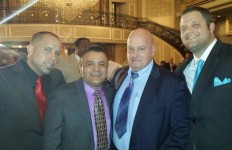