LOS ANGELES (Sept. 5, 2013) – Chris Arreola (35-3, 30 KO’s), of Riverside, Calif. and Seth Mitchell (26-1-1, 19 KO’s), of Brandywine, Md., got into a heated verbal exchange during Wednesday’s final press conference for their 12-round heavyweight showdown for the WBC Silver Championship thisSaturday, Sept. 7, on SHOWTIME BOXING: Special Edition live on SHOWTIME® immediately following ALL ACCESS: Mayweather vs. Canelo Episode 3 Premiere, which begins at 10 p.m. ET/PT (delayed on the West Coast).

In the 10-round co-feature from Fantasy Springs Resort Casino in Indio, Calif., former two-division world champion Rafael Marquez (41-8, 37 KO’s), of Mexico City, will take on Efrain Esquivias (16-2-1, 9 KO’s), of Gardena, Calif., in a featherweight bout.

“He [Mitchell] says every time I’ve stepped up I’ve lost. You’re not a step up, I’m stepping down to you.  You’re way down here.  You’re a step down and remember that.  I didn’t have to run the combine or do the 40-yard dash because trust me I do a six-second 40-yard dash and I don’t bench press. That’s not what I do.  I’m a boxer and I’ve been boxing since I was 7 years old. I didn’t just start boxing just because I couldn’t cut it in the NFL or couldn’t cut it in football.

“I’ve been boxing my whole life and I’m going to prove it on Saturday night.  I’m going to show you that you don’t belong in this sport.  I’m telling you I’m more prepared for this fight than I’ve been in a long time. I’m motivated.

“If this man beats me, then I’ll consider retirement because there’s no way this guy could beat me.  Not the way I’ve trained.  This guy is nothing to me.  I respect his stamina and his power.  I respect every heavyweight’s power so I have to mind my p’s and q’s.

“He’s going to regret he took this fight. I’m going to make him fight every minute, every second of every round.  Don’t forget to bring your football helmet because you’re going to need it.

“The difference between this training camp and any other is that I was in Arizona and not Riverside.  I’ve been at the gym every morning and every night..  This time there’s no one to blame but me.  It’s all on me. I’m the one who goes to the gym or doesn’t go to the gym. I’m the one who cuts corners.  Me.  And that’s something I had to get away from. Get away from home.

“There was only one car and one car key.  Henry took me to the gym every day and made sure I was there.  My cardio is way up, so much better than my last fight.”

“Make no mistake about it, this was a fight that I wanted. I don’t talk a lot in the paper. I don’t Tweet. This is the fight that I wanted.  Chris Arreola is a great fighter.  He comes forward and applies a lot of pressure.  But I don’t see anything special. Nothing I can’t take care of on Saturday.

“Every time Chris Arreola has stepped up he’s lost.  He and his trainer do a lot of talking. But just know that I’m prepared and they can say whatever they want to say but they are going to have a fight on the 7.

“I’ve worked hard and I’m ready for this fight. I have speed, power and size. I’m the complete package.

“SHOWTIME puts on exciting fights and our styles complement each other so it’s going to be a great fight.  If I was a betting man I know where I would put my money.

“I started late so I know there’s a lot to learn, but on the flip side I haven’t taken a lot of punches, either.”

“Being retired never entered my mind. I took some time off and came back with [current trainer] Nacho [Beristain] because I feel like I still have something to prove to the fans.

“I’ve signed [with Golden Boy Promotions] for four fights, but my mind is on this fight right now.

“I hope he comes forward because that’s exciting for the fans.  Everyone knows that’s my style and I want to make the most exciting fight for my fans.

“I have a lot to prove.  I want to be a world champion again.”

“I want to fight the best fighters out there and I thank Thompson Boxing Promotions and Golden Boy Promotions for making this fight happen.  I’m coming in real strong and ready to show boxing fans that I’m capable of competing for a world title.  I’m not an opponent; I’m here to win.

“The fans are going to see a great fight.  I don’t back down and neither does Marquez.  My team and I created a great game plan and we’re hungry for this fight.

“Most people in the sport know about my father passing away from ALS.  He’s the one who gives me the strength to continue.  His spirit lives within me and he’s the reason why I fight.

“We went hard during our training camp to be fully prepared for whatever Marquez throws at us.  I view myself as the favorite.  That’s no disrespect to Marquez, he’s a future hall of famer, but I always feel like I’m the best boxer in the ring.

“It would mean the world to me to beat Rafael Marquez.  Some people say he has lost a step, but I don’t think so.  Look at his brother, Juan Manuel Marquez.  These guys are built for longevity.”

“Moving his training camp to Arizona got him out of the norm and we’re in great shape. There’s nothing left now to do but get in the ring on Saturday.

“It’s finally good to see [Mitchell] speak up a little bit and show a little fire. It’s the heavyweights and it’s good for interest in the fight.  Something we said got under his skin.  I don’t know what it was but it was something.  Both guys are highly motivated and it’s good to see.”

“Training has been going great. Both the guys are in great shape. We’ve been studying a lot of film. You can say this is his biggest fight but Johnathon Banks was probably just as big. It was on the same level.”

“These are the two most exciting heavyweights on earth.  You are not going to want to miss this fight. When you have Mayhem (Mitchell) and Nightmare [Arreola] you’re going to have a storm. You can just feel the intensity right here.”

“We love it all.  This is what boxing needs: two hungry guys going for it all and vying for a shot at a world title.” 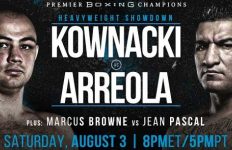 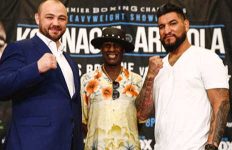