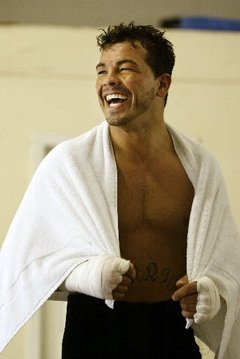 Last night, HBO’s “Real Sports” ran a piece on the deaths of Arturo Gatti, Alexis Arguello and Vernon Forrest. Ted “The Bull” Sares explains why he didn’t watch that program.

There’s only one way you can lick [Tony] Zale–you gotta kill him. — Rocky Graziano

The proof is in the pudding when I get in the ring. — Carl “The Cat” Thompson

I hear the cheers when I need to hear them. It feels good to know my fans are still behind me. –Arturo Gatti

It was a tough fight, but that’s the way I like to win them . . . I said I was going to introduce new blood to the sport, and I guess you saw a lot of new blood. — Michael Katsidis

REAL SPORTS WITH BRYANT GUMBEL featured a special edition on April 13 investigating the 2009 deaths of Arturo Gatti, Vernon Forrest, and Alexis Arguello. I skipped the feature because no matter how much investigating you can do, it won’t bring back the warriors. No, I’d rather remember them by writing about them.

Danny “Little Red” Lopez was often referred to as “Mr. Excitement.” He was never in a dull fight, and was most dangerous if he had been decked–which was often. Soft-spoken and humble, he was ferocious and unrelenting once the bell rang. In an era in which fights were regularly seen free on non-cable television, he was one of the greatest of the television fighters and his name guaranteed big ratings. Danny was a volume puncher who worked to set up his knockout blow which he could deliver with either hand. His fights often turned into melodramas in which he overcame knock-downs, severe punishment, and adversity to score sudden and spectacular knockouts. In this regard, he was like Matthew Saad Muhammad. He was a “Gatti before Gatti.” He would get off the canvas and roar back. Turning predator, he would hunt down and take out his opponent in savage fashion. He was heavy-handed which belied his skinny appearance and if he connected flush, it usually spelled the end. In 1979, Lopez KOd Mike Ayala in the fifteenth round in what was Ring Magazine’s Fight of the Year.

Like fellow Californian Bobby Chacon, “Little Red” connected with his fans in an electric way. The roars started as soon as he was seen coming down the aisle with his American Native Headdress on and didn’t stop until he left the ring–usually a winner. And like Chacon, he left boxing with a reputation of being one of the most exciting fighters to toil in the square circle. Lopez was inducted into the World Boxing Hall of Fame at age 35, the youngest man ever elected. He will be inducted into the International Boxing Hall of Fame in 2010 finally joining Saad and Bobby in his rightful place.

Matthew Saad Muhammad was another who was extremely popular and connected with his fans in a special way. His action-oriented style guaranteed that almost every fight would be a thriller in which he would come back from the precipice to put his opponent away. His rematch with another great fan-favorite, Yaqui Lopez, was one for the ages as Saad was hit with 20 unanswered hard blows in round eight, but he recovered to drop Lopez 5 times in route to a knockout win. It was Ring Magazine’s 1980 Fight of the Year.

Matthew Saad Muhammad’s signature was his ability to absorb punishment and then mount drama-filled comebacks. Indeed, he was nicknamed “Miracle Matthew,” but in retrospect, he could well have been nicknamed “Gatti before Gatti.” He was inducted into the Hall of Fame in 1998.

For fans fortunate enough to have watched fights on Saturday and Sunday afternoons in the late 70’s and early 80’s, the action provided by Danny Lopez and Matthew Saad Muhammad will never be forgotten. They were perennial crowd favorites and their legacies are forever secure with aficionados

Most of what can be said or written about this exciting warrior has already been said and it is not my intention to add much except to point out that he shared something in common with Bobby Chacon,” Little Red,” “Miracle Matthew,” and a few other special people like Tony DeMarco and Carmen Basilio.

What made them special? Each was an all-out action fighter who possessed tremendous recuperative powers in the ring; each was known throughout his career for having unique connections with their adoring fans. In this regard, as soon as the crowd spotted “Thunder” with his Old School-style white robe, they would start the roar that would follow him into the ring and chills would go down your spine.

Maybe it was their propensity to take it to the brink each and every time out–to lay it all on the line without regard to their own wellbeing. Each participated in classics;’ Gatti participated in Ring Magazine’s Fight of the Year an astounding four times (1997, 1998, 2002, and 2003). But above all, these hard men always demonstrated tremendous and immense heart, and that’s one of the most important things for boxing fans because boxers with heart never give up. They are ceaseless aggressors; oncoming warriors who will gladly absorb two or three punches just for the opportunity of landing one. Quit was not in their DNA.

Now I know I have left many valiant warriors out, and I deeply apologize for that, but in the end, only the late Arturo Gatti enjoys the ultimate compliment of having other warriors referred to as “Gatti before Gatti.”