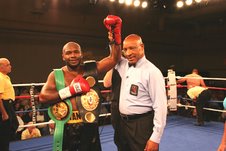 Sherman Williams on six-fight win streak
TAMPA (August 11, 2006) – Bahamian heavyweight Sherman “The Caribbean Tank” Williams has been displaying newfound power in the last four months, which he attributes to a dedicated strength-and-conditioning program, as well as his increased comfort level thanks to a new team in his corner.

Williams (31-10-2, 17 KOs), 33, suddenly finds himself owning two title belts – WBC CABOFE (Caribbean Boxing Federation) and NBA – and much more pop in his fists than he’s ever demonstrated during his nine-year pro boxing career. In his last fight (Friday, July 28 in Las Vegas), Williams starched Josh Gutcher 71-seconds into the opening round, after unloading a devastating, picture-perfect 1-2 punch on the button. It was a carbon copy of the same combination that put David Washington to sleep March 31 in Tampa.

In the 21st century, prior to stopping Washington, Williams had stopped only three opponents in 20 bouts. “I’ve always had a good overhand right and left hook,” Williams explained. “Now I’m placing ’em. About eight months ago, I started going to the gym every day with my manager, Jim Rider, who is a big guy. I started a strength-and-conditioning program with him to increase my power. I also have a different trainer (Gus Curran), who has helped me, but part of it is just placing my punches right. I did it in March when Washington was out on his feet. I pulled it off again last week against Gutcher. I really felt those punches. I was told Gutcher was flat-footed, but he came out and took off like Larry Holmes. I hit him with a strong right to the body and went upstairs with my left hook. I’m just glad the kid was okay. It was a perfect punch. Only 71-seconds, not to mention I defended two titles.”

Williams has had an up-and-down career, starting in 1998, and his first notable victory came a year later when he knocked out previously unbeaten Frank Wood (16-0) in the second round. In 2000, Sherman fought a 10-round draw against future world heavyweight title challenger Jameel McCline, and followed that with an impressive six-round decision against Cisse Salif (9-2). Two years later, Williams won a 10-round decision against former world cruiserweight title-holder Al “Ice” Cole (31-9-2), and beat Samson Po’uha (20-4-1) by 10-round majority decision. But then the “Caribbean Tank” ran into a funk, spiraling between wins and losses on an alternating basis until late 2004, and he’s won all six of his fights since then.

“I don’t feel that I’m far away from a big fight,” Williams said. “I’ve turned a lot of negatives into positives. I had a lot of managers and promoters. If things aren’t right a fighter can’t succeed. I ended up taking wrong fights. Now I’m fortunate to be with Silverhawk and a good manager. They treat fighters like human beings, first, and we’re going to the top one step at a time.

“But through all of my trials and tests, I trained with world champions like Hasim Rahman and John Ruiz, as well as some of the top European heavyweights, and I gave them a handful. The heavyweight division has some great fighters, but I believe in the old times when styles made fights. I’m ready right now to handle some top 20 fighters whose styles are perfect for me. I’m moving forward.”

For more information about Williams or Silverhawk Boxing visit www.silverhawkboxing.com.