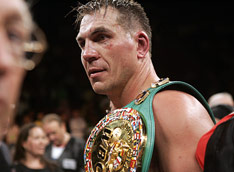 I need to find a recipe book that has different ways to fix crow. It seems like I’ve been eating a lot of it lately.

Oleg Maskaev is the new WBC heavyweight champion as he halted defending titleholder Hasim Rahman in the twelfth and final round. It was a well contested scrap. A lot of holding but a lot of power shots landed by both. They both tried to establish their jabs but in the end it just came down to I’ll hit you, you hit me. Last man standing…A real shoot out.

Give Oleg his props. He’s 2-0 over Rahman and he’s in the thick of the heavyweight picture.