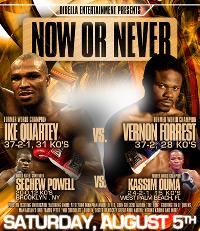 Vernon Forrest, 38-2, 28 KO’s won a unanimous but very close decision over Ike “Bazooka” Quartay, 37-3-2, 31 KO’s. They started getting into it pretty quickly, and early on there was some good action and impressive exchanges. Quartay was usually the aggressor, and when they fought at close range, it appeared to be Ike’s night. However, when the tempo slowed and Forrest used his legs and mixed up his attack, he appeared to squeak out many very close rounds.

After each round most of the press where I was seated was not in agreement as to who had won each particular round. In the end it seemed inevitable that the scores would be all over the place (as they were in press row). It was a tough fight to score and many ringside observers had it for Quartay, however my card read 95-94 Forrest, matching 2 of the official judges scores, with the 3rd judge scoring the fight 96-93 also for Forrest. The 96-93, seemed to be a bit of a stretch, especially considering that Forrest lost a point in round 9 for low blows, but in a 10 round fight with this many close rounds, it is difficult to be truly surprised by anyones score.

The crowd erupted after the scores were announced and it appeared that many of the fans in attendance felt very strongly that Quartay had won the fight. Vernon Forrest and even moreso Ike Quartay has a style that often makes it difficult to score his fights. Many people thought Forrest won the 2nd Mayorga fight and many people felt that Quartay defeated Oscar DeLaHoya when they met years ago based on many of the middle, slow paced rounds which Ike appeared to control with his jab despite a late rush by Oscar. More recently, Quartay’s fights with Fernando Vargas and Verno Phillips were sometimes difficult to score because of his style.

A fight like this seems to call for a rematch, just like we had recently between a few popular ring veterans named Mosely and Vargas. The second fight in that rematch settled the score, and may be a good option here as well.

Kassim Ouma, 25-2, 15 KO’s won a convincing unanimous decision over Sewchew Powell who was beaten for the 1st time as a pro and fell to 20-1, 12 KO’s. Ouma, who according to punchstats threw 1043 punches just outworked Powell for most of the night. Powell would land a harder punch once in a while, but Ouma is so busy it is tough to deal with him. My card read 98-92 for Ouma at the final bell. Scores varied more then they did in the main event in this fight as the 3 ringside judges scored it 96-94, 97-93 and the 3rd judge (a sweep) at 100-90.

Powell was dealt his first loss, but he will be back. He did not perform porrly, he was just outworked by one of the busiest fighters in the sport. If anything, he could have fought with more urgency late, but it surely was a good learning experience for him. It was also good to see Ouma is back to his old ways.